As each name was read, Veterans Advisory Board Chairman Bill Ober rang a bell. 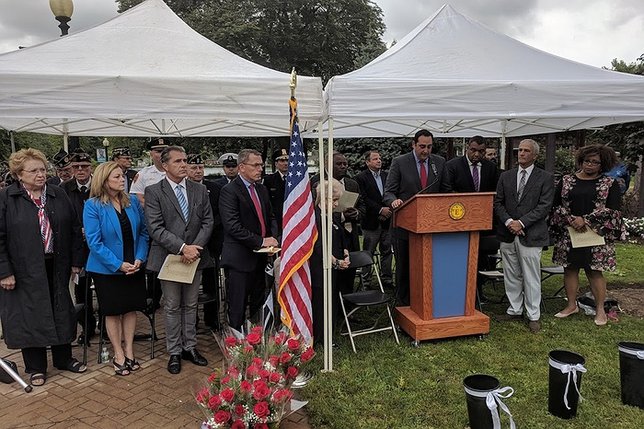 Huntington, NY - Sept. 11, 2018 - The Town of Huntington remembered 43 Town residents who perished in the September 11th, 2001, terrorist attacks in a ceremony at the 9/11 Memorial in Heckscher Park Sunday, September 9.
"It is hard to believe there is an entire generation of young people who do not know what it was like to experience and live with memories of that day," said Supervisor Chad A. Lupinacci, who served as master of ceremonies and later addressed victims' families. "It is in the memory of your loved ones we hold this ceremony this year and every year so that we can remember your loss – which remains our loss – and educate those too young to have lived through that day."
In the Town’s first 9/11 Memorial Service on a day other than September 11, a move made by the Town to make it easier for Huntington victims’ family and friends to attend, Supervisor Chad A. Lupinacci, Councilmembers Mark Cuthbertson, Eugene Cook and Joan Cergol, and Town Clerk Jo-Ann Raia read the names of the 43 Huntington residents who perished in the attacks.
As each name was read, Veterans Advisory Board Chairman Bill Ober rang a bell as members Paul Kelly, Bob Santo, Walter Scally, Mortimer Roberts, and Jerald Griliches, representing member Morris Koffer, placed a rose in a vase.
The invocation was delivered by Deacon Jean D. Cantave of St. Francis of Assisi in Greenlawn. A benediction was delivered by Rabbi Yaakov Raskin of the Chabad of Huntington Village to close the ceremony.
Among those present were family members of 9/11 victims Craig M. Blass, Judson "Judd" Cavalier, Michael J. Duffy, Dennis M. Edwards, Frederick H. Kelley, Kristin Irvine Ryan, and James B. Reilly.
Also in attendance for the ceremony were Highway Superintendent Kevin S. Orelli, Tax Receiver Jillian Guthman, former Town Supervisor Toni Rettaliata-Tepe, New York State Assemblymen Andrew Raia and Steve Stern, Suffolk County Legislator William Spencer, Senior Chief Officer Tony Martinez of the U.S. Coast Guard at Eatons Neck, Suffolk County Police Lieutenant Michael Teplansky, Northport Village Chief of Police Bill Ricca, Huntington Veteran Commanders, Veterans and Color Guards, Huntington Community First Aid Squad members, President of Sons of Italy Perry Como Lodge Anne Cajigas, and local fire departments and volunteers.
Brueggemann Funeral Home in East Northport donated roses for the ceremony. Qwik Ride provided free transportation circling the parking areas for the ceremony.