To mark the 15th anniversary of 9/11, Treasures of New York: The Trees shares the untold story of life returning to Ground Zero. 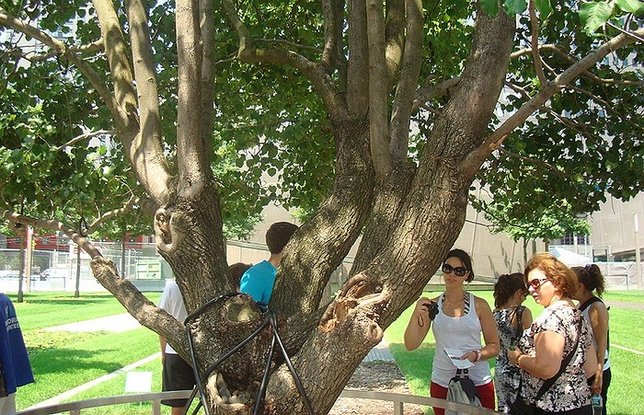 The Survivor Tree at Ground Zero. This year marks the 15th anniversary of 9/11 attacks.

New York, NY - August 31, 2016 - To mark the 15th anniversary of 9/11, Treasures of New York: The Trees shares the untold story of life returning to Ground Zero—and emphasizes the importance of nurturing the public open space in one of the City’s densest neighborhoods into a vital green space. The visually stunning film conveys the emotional journey of the design and building of the outdoor living memorial at the World Trade Center site and the story of The Survivor Tree, the charred Callery pear tree that was the last living thing to be saved from the rubble of the WTC site after the 2001 attacks.

Directed by documentary filmmaker Scott Elliott, The Trees was filmed over the course of five years with the cooperation of the National September 11 Memorial & Museum and features unprecedented access to the construction site. The film explores themes of resilience and rebirth--examining the fundamental need for human beings to find a source of healing after tragedy, and the deep-seated role that nature plays toward that renewal. The trees themselves are the most dynamic main characters and vivid storytellers in this lyrical film, which chronicles the journey of the 420 oak trees—first as saplings that were harvested from the states where 9/11 victims lost their lives, then nurtured for seven years at a nursery in New Jersey, and finally transplanted as symbols of hope at the World Trade Center Memorial Plaza in New York City. Viewers will see them in all seasons—with beautifully colored leaves in fall, with the bare branches of winter, with hopeful spring blooms, and in summer as New Yorkers, tourists, survivors and 9/11 family members come to gather, relax and remember in the shade under their branches.

The film features world-renowned architect Michael Arad and landscape architect Peter Walker, the visionaries behind the design, and the hundreds of builders, artists and arborists who painstakingly grew, transported and implemented the 420-tree urban forest at the 9/11 Memorial Park site beginning in 2010. Viewers will also meet arborist Jason Bond, who cares for the 400 swamp oaks as if they were his children, and Tom Cox, who is charged with transplanting the 400 trees into one of the world’s most complex, sustainable green roofs in the world.

Richie Cabo, a retired corrections officer wounded in the line of duty, nurtures back to health the Survivor Tree—whose cuttings have now become the source of hundreds of new saplings that can be planted as an ongoing inspiration and reminder. The Memorial Park trees have also become symbols of strength, hope and renewal—with visitors retrieving fallen acorns and planting them in special areas upon returning home. Anne Van Hine is a tour guide at the Memorial who carries such acorns in her pockets. She lost her husband, a firefighter and an arborist, on 9/11. For her, the trees are a strong symbol of life. Erica Svendsen and Lindsay Campbell, social scientists at the United States Forest Service, take viewers along to visit some of the unofficial living memorials that have sprung up in the New York area, further demonstrating the unique role of nature in helping a grieving community to heal.

For more information about the series and this program, visit the Treasures of New York website. For additional information on The Trees film, go to www.thetreesfilm.com or engage on Facebook and Twitter.

Treasures of New York is a production of WLIW LLC in association with WNET. WNET is the parent company of WLIW21 and THIRTEEN, New York's public television stations and operator of NJTV. Diane Masciale is general manager of WLIW21 and executive producer of local production, including the Treasures of New York series. Executive-in-Charge of Production is John Servidio.

Funding for The Trees program is provided by Jean Pitaro, Karen Shepherd, Brian Johnson, Wendy Ingersol Perry, Stephen B. Shedden, Nancy Wohlsen, Richard Elliott, Karen Richardson, Mary Jane Elliott, and others. A full list of underwriters is available at the film’s website and from WNET and WLIW.

WNET's groundbreaking series for children and young adults include Get The Math, Oh Noah! and Cyberchase as well as Mission US, the award-winning interactive history game. WNET highlights the tri-state's unique culture and diverse communities through NYC-ARTS, Reel 13, NJTV News with Mary Alice Williams and MetroFocus, the daily multi-platform news magazine focusing on the New York region.

In addition, WNET produces online-only programming including the award-winning series about gender identity, First Person, and an intergenerational look at tech and pop culture, The Chatterbox with Kevin and Grandma Lill. In 2015, THIRTEEN launched Passport, an online streaming service which allows members to see new and archival THIRTEEN and PBS programming anytime, anywhere: www.thirteen.org/passport