Peconic Landing is proud to announce that its interactive art accessibility program “Art Without Barriers” has been named one of LeadingAge New York’s 2015 Innovations of the Year. 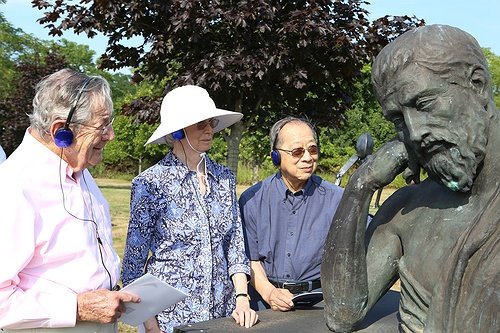 Greenport, NY - June 12, 2015 - Peconic Landing is proud to announce that its interactive art accessibility program “Art Without Barriers” has been named one of LeadingAge New York’s 2015 Innovations of the Year.

The award distinguishes organizations that use creative problem solving to improve the quality and access of services for seniors, according to the advocacy group website. It was presented to Peconic Landing June 9 by LeadingAge president/CEO James W. Clyne, Jr.

“This award recognizes programs that stand out because of their creativity, vision, success and ability to replicate,” said Clyne.   “Art Without Barriers goes beyond helping seniors, it caters to people of other abilities.”

“Art Without Barriers” is designed to ensure people of all visual, hearing and mobile abilities have the opportunity to enjoy art. Made possible by Peconic Landing’s Resident Art Committee and grant funding provided by the Mattituck Lions Club, the program features an interactive tour of Peconic Landing’s sculpture garden which is home to 18 different works of art displayed across campus.

Guests of different abilities have the option of using descriptive audio narration available via a free smartphone download, large print or braille catalogues, as well as easy access to the garden by way of cleared foot trails to improve the tour experience.

“People from all over the world, from as far as China, have engaged with the program and downloaded the descriptive audio to enjoy,” Dominic Antignano, Peconic Landing’s cultural arts curator. “That means a lot to us, that people are connecting Peconic Landing with culture and the arts.”

Art descriptions adhere to standards set by the American Foundation for the Blind. Visitors are also invited to touch the sculptures to get a sense of their texture and design. (Click here for an informational video about the program.

“This program allows us to connect with our residents, but also members of the greater community,” said Robert J. Syron, president/CEO of Peconic Landing. “This award winning program provides greater access for all to enjoy culture and the arts.”

Through the program, Peconic Landing has formed relationships with the Suffolk Independent Living Organization, Suffolk County’s Office for People with Disabilities, the New York State Commission for the Blind and the Guide Dog Foundation for the Blind, helping it to understand the needs of those with visual impairments.

Audio narratives are available as free downloads to any smartphone from Peconic Landing’s own iTunes channel. For more information or to schedule a guided tour please contact Dominic Antignano at (631) 477-3800 ext. 229.

Peconic Landing is an innovative, not-for-profit CCAC-CARF-accredited continuing care retirement community (CCRC) located on the waterfront in Greenport, N.Y., on the North Fork of Long Island. Among its long list of achievements, Peconic Landing is the only equity-based LifeCare community in the state of New York. It is a member of LeadingAge and LeadingAge New York and embraces a healthy, active lifestyle infused with a sense of exploration, creativity and generosity of spirit.