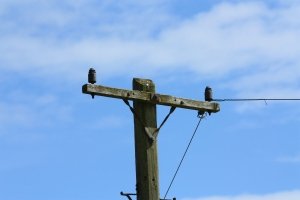 Around 6,000 LIPA customers lost power around the town of Elmont early Tuesday morning after a longtime transit employee stole an MTA truck and caused massive amounts of damage to the area.

53-year-old Joel Grassman evidently attempted to take welding equipment from a facility in Jamaica, Queens, and when he was unable to fit the items in his car decided to steal a truck with a large boom to carry them. Grassman left the truck’s crane erect while making his getaway just after 4:00 AM, which in turn tore down wires and tree branches along a mile stretch of Meacham Avenue in Elmont.

Numerous poles and trees were knocked down in the process, as was one of the road’s traffic lights. Roughly 6,000 customers lost power as a result of the destruction, though workers have already restored electricity to all but 500 of them. Police cautioned residents to stay off the road, unsure whether any of the broken wires were still live.

The MTA truck was recovered near the Southern State Parkway at Corona Avenue with wires wrapped around the boom and debris in the back of the vehicle. Grassman, who had abandoned the truck, was tracked down and arrested. He has multiple prior arrests, including a 1981 charge for criminal trespassing, stolen property, and petty larceny; he was also arrested in 1985 for a DWI and criminal possession of controlled substances.