While most dogs enjoy being outdoors and free to roam in their caretakers fenced in yards, there are some who are unfortunately left tethered or chained up for many hours. 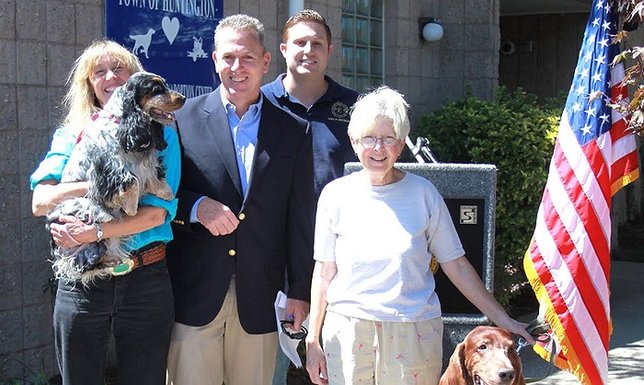 Councilman Mark Cuthbertson is pictured at the Town of Huntington’s Animal Shelter in East Northport, with Ginny Munger Kahn and Barbara Buscarino of LI Dog, along with Michael Costa of the Town’s Animal Shelter and special guests; Winslow & Lexi to announce the Councilman’s new measure to curb animal abuse.

East Northport, NY - August 23, 2016 - While most dogs enjoy being outdoors and free to roam in their caretakers fenced in yards, there are some who are unfortunately left tethered or chained up for many hours and in all weather conditions. Tethering animals outdoors for an extended period of time is not only harmful to dogs – it is also a high risk factor in serious dog bites and attacks against their owners and others.  A new local law spearheaded by Councilman Mark Cuthbertson and announced during a press conference held on August 17th at the Town’s Animal Shelter, is aimed at curbing this inhumane and unsafe practice.

“A study by the Centers for Disease Control found that chained and tethered dogs are 2.8 times more likely to bite and the long term effects of tethering can severely damage a dog’s physical and psychological well-being,” stated Councilman Mark Cuthbertson.  “My new anti-tethering legislation that was enacted on August 16 is designed to better protect the health, welfare and safety of Huntington residents and their animals,” added Cuthbertson.

Under Councilman Cuthbertson’s legislation, it prohibits the tethering, leashing, fastening, securing, restraining, chaining or tying of a dog to a stationary object for more than two continuous hours in any 12-hour period.  The law also requires that the restraint be at least 10-feet for a running able trolley and 15 feet for a tether to a stationary object – long enough to give the dog continuous access to food, water and shelter. In addition, the stationary tether, leash or chain should not weigh more than 1/8th of the dog’s total body weight, nor exceed 10 pounds.

Councilman Mark Cuthbertson was joined by Ginny Munger Kahn and Barbara Buscarino of L.I.-Dog, a non-profit dog advocacy organization at his August 17 press event in support of the new anti-animal cruelty legislation.

“We strongly support the Town’s efforts to curb the practice of tethering dogs outside for long periods of time and by means that can cause pain and suffering.  As animal lovers, it’s hard for us to understand why any animal is ever subjected to abuse. We are so grateful to Councilman Cuthbertson and the Town Board for taking action to restrict this inhumane practice,” stated Ginny Munger Kahn, president of LI-Dog.

An added measure in the legislation will now lawfully require all dog owners to “pooper scoop” after their pets and deposit their doings inside a sealed plastic bag before depositing in a covered garbage receptacle.

For questions or to receive a copy of Councilman Mark Cuthbertson’s new anti-animal cruelty legislation, please contact his office at: 631-351-3171 or send an email.