The Mets signed a new pitcher in Daisuke Matsuzaka, and the Yanks picked up a pair of milestone hits against Toronto. 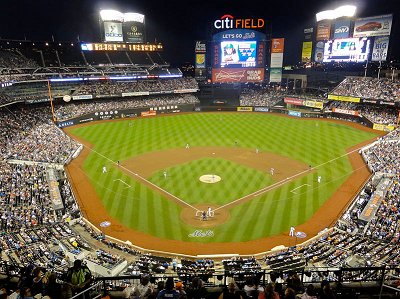 The Mets kicked off a 9-game home stand with a short series against the NL East-leading Braves on Tuesday evening. Ike Davis drove in the first run of the game on a ground ball single to right field in the first inning, providing New York a 1-0 lead which looked like it might be sufficient for a win as Zack Wheeler cruised through six shutout innings.

Some insurance came in the bottom of the sixth when, as Eric Young and Daniel Murphy stole third and second base respectively, a throwing error by catcher Brian McCann gave Young an opportunity to run home. Marlon Byrd hit his career-high 21st homerun shortly afterward, putting the Mets ahead 4-0.

Those runs proved vital, as a tiring Wheeler loaded the bases in the seventh on a double and two walks after getting the first two batters of the inning out. Carlos Torres took over only to give up a bases-clearing double, and Scott Rice came on to get the final out.

Davis scored the last run of the game on a solo shot in the bottom of the eighth, and LaTroy Hawkins worked a 1-2-3 ninth to earn his 5th save as the Mets won 5-3 and Wheeler improved to 6-2.

After three scoreless innings in Wednesday’s follow up, Josh Satin made sure the Mets got on the board first again with leadoff homer in the bottom of the fourth, but the 1-0 lead held only until the sixth when Freddie Freeman knocked an RBI single off of Jon Niese to tie the game. Niese struck out the next batter to end the frame and struck out two more in the seventh to work out of jam, but would not get a decision as the game was still tied when he turned the ball over at the start of the eighth.

Neither team would score again in regulation, however it did not take long for Atlanta to explode in extras. After two fly-ball outs to start the tenth, the Braves put two runners on with singles off Scott Atchison and Scott Rice. Greg Burke was the third pitcher in as many at-bats who tried to end the inning; instead of working an out his first pitch was launched out of the field by Chris Johnson for a 3-run homer. New York had no answer in the bottom of the inning and Atlanta split the series with a 4-1 victory.

Though the Mets had the night off on Thursday, they still made an interesting move in signing a new starting pitcher, Daisuke Matsuzaka, to help get them through the rest of the season. The former Red Sox pitcher will fill a gap left open since the organization released an injured Shawn Marcum one month ago.

Daisuke got the start against Detroit on Friday, and struggled heavily in the early going. He gave up a homerun to just the second batter he faced and, though Marlon Byrd made up for the run with an RBI single in the bottom of the first, Matsuzaka let the Tigers score again in the second on an RBI double and 3-run homer to go ahead 5-1.

The newest Met did not allow another run over the rest of his five innings, nor did his team provide any additional run support. Carlos Torres afforded Detroit another homer in the seventh inning, which marked what would be the final score as the Tigers beat the Mets 6-1.

The series will continue at 4:05 PM today and finish at 1:10 PM tomorrow afternoon.

After taking 2 out of 3 from the then AL East-leading Red Sox, the Yankees squared off against the bottom of their division for a doubleheader on Tuesday. Toronto took an early lead as the Jays rocked Ivan Nova for 4 runs in the top of the second, but Nova buckled down and did not allow another run in the rest of his innings despite being visibly off his game.

Robinson Cano cut the deficit down to a single run with a stroke of the bat that also marked a major personal milestone: his 3-run blast in the bottom of the third was the 200th homerun of his career. The score remained 4-3 until the sixth inning, when Chris Stewart smashed a 3-run homer of his own to put the Bronx Bombers up 6-3 and place Nova in position to earn a win.

The Blue Jays did not score again, but Cano hit an RBI double in the seventh and Bret Gardner drove in a run on a sacrifice fly in the eight. Mariano Rivera got the last two outs of the ninth inning after Joba Chamberlain walked his second batter, despite not being in a save situation, and the Yanks won 8-4. Nova improved to 7-4 on the year after pitching through six and a third innings.

Phil Hughes took the mound for Tuesday’s nightcap and, though he let a run score on a wild pitch in the first inning, the struggling pitcher played a key role as he kept Toronto to a low score. Cano continued his productive day with an RBI single to tie the game in the third inning, but Rajai Davis broke the tie in the Blue Jays’ favor with a sac. fly off Hughes in the fifth.

Hughes got through the rest of his six innings without further incident, which allowed Jayson Nix to tie the game once more with a homerun in the bottom of the seventh. The score remained 2-2 when Mariano Rivera took the field for the second time in one day to hold down the ninth; Rivera did not allow a run which set Jayson Nix to end the game as he scored his second run on a walk-off RBI single. Rivera was credited with the win (his 4th of the year) as New York edged out Toronto 3-2.

After sweeping the doubleheader, the Yankees turned to a couple of non-starters to try to piece together Game 3 on Wednesday. Ichiro Suzuki gave the team some early momentum with a single in the first inning; that hit was the 4,000th of his professional career (the first 1,278 came in Japan), joining Ty Cobb and Pete Rose as one of the only three men to accomplish such a feat.

Historic though it was, Ichiro’s hit did not drive in a run and the Blue Jays took a 1-0 lead when Munenori Kawasaki hit an RBI single off Adam Warren in the second inning. Austin Romine tied the game with a sac. fly off of former Met RA Dickey in the bottom frame.

The Yankees briefly held a lead when Curtis Granderson hit an RBI single in the third inning, but the fourth got off to an awful start for New York. Jayson Nix left the game having sustained an injury to his left hand which was hit by a pitch back in the second; X-Rays later revealed that the hand had been fractured. Once Mark Reynolds stepped on the field to take over for Nix, Warren gave up a game-tying homerun to the first batter of the inning, then hit the second. David Huff took over for Warren and was able to get out of the inning without allowing any more runs.

Huff stayed on for 5 full innings, keeping the scored tied 2-2 long enough for Alfonso Soriano to smack a 2-run homer in the bottom of the eighth. Rivera pitched for the third time in two days, and retired all three men he faced on two strikeouts and a pick-off to notch his 37th save as New York won 4-2.

Rain caused Thursday’s close to the series to start over three and a half hours late, though the delay did not seem to do Andy Pettitte any harm—the 41-year-old starter threw four scoreless innings before JP Arencibia got to him with a leadoff homer in the fifth. Andy did not allow another run, and Granderson responded in kind with a homerun to kick off the bottom of the inning. Vernon Wells then drove in the leading run on what appeared to by a sac. fly but was called a force out, though Eduardo Nunez would have scored in either circumstance.

Nunez provided the team a little extra cushion with a 2-run single in the sixth, and Chris Stewart followed with an RBI groundout to put the Yanks up 5-1. The Jays hit 2 runs off Shawn Kelley in the seventh inning, but would not score again. David Robertson earned his second save of the season in a weary Rivera’s stead, and Pettitte improved to 9-9 on the year as the 5-3 victory provided New York with a 4-game sweep of Toronto.

Following 5 straight victories in the first half of a 16-game stretch of intra-divisional games, the Yankees headed down to Tampa Bay to face the now AL East-leading Rays last night. Alfonso Soriano got the game started in the right direction with an RBI single in the first inning, but for the second straight start Hiroki Kuroda labored against a tough opponent. Kuroda gave up a 3-run homer to Jose Lobaton in the bottom of the second, and then a pair of back-to-back solo shots to Evan Longoria and Matt Joyce in the third inning.

Lobaton struck again with an RBI single in the fourth to put Tampa up 6-1, and Kuroda was hit for another homer by Ben Zobrist in the fifth. Though Joba Chamberlain came on to provide two strong innings of relief, the only run New York could muster after Soriano’s single in the first came on a Cano groundout in the sixth. The Rays won 7-2 in the first of three games.

The two teams will meet again at 7:10 PM tonight, and finish the series at 1:40 PM tomorrow. New York currently site 3.5 games out of the second Wild Card spot.