Nassau County has constructed an emergency command center in Hicksville, that will facilitate emergency communications and operations. 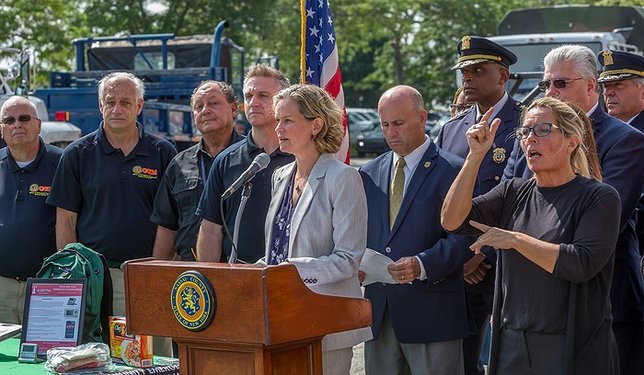 Bethpage, NY - August 22, 2018 - With the sixth anniversary of Superstorm Sandy approaching, Nassau County Executive Laura Curran today joined with Nassau County Office of Emergency Management Commissioner Steven Morelli and other Nassau County Public Safety and Emergency Response personnel to discuss important storm preparations and resources for residents.
“Long Islanders know all too well the threats posed by Hurricane Season,” said Nassau County Executive Laura Curran. “Now is the time to prepare.”
Since Hurricane Sandy, Nassau County has made several emergency preparedness improvements including adding Disaster Management Contractors and Disaster Monitoring Consultants to work with the Department of Public Works. Their services will include debris removal, documentation and disposal throughout the event and cleanup.
Nassau County has constructed an emergency command center in Hicksville, that will facilitate emergency communications and operations through a single, state-of-the-art location.
In addition, the Nassau County Office of Emergency Management, has implemented a new early warning system, Everbridge, which can do mass notifications as well as pinpointed notifications to specific regions as well as an ALERTFM system, which uses radio station transmitters to send additional notifications.
This year’s hurricane season is predicted by the National Oceanic and Atmospheric Administration (NOAA) to be “near-normal.” There is a high likelihood of ten to 16 named storms, including five to nine hurricanes. Hurricane season runs through the end of November.
Hurricanes can bring heavy rains that cause major flooding; destructive winds that down power lines, uproot trees and damage homes; and dangerous storm surges.
“As we enter the 2018 hurricane season, I remind everyone, if you are ordered to evacuate, know the route and plan where to go,” said County Executive Laura Curran. “
To Do List for Storm Preparedness:
In addition, Governor Andrew Cuomo just announced that the Division of Homeland Security and Emergency Services has awarded $10 million in Public Safety Answering Points Operation Grants, which will be distributed among 57 counties. The funds are to be used to upgrade and improve emergency communications to the newest technology to dispatch our first responders.
“We thank Governor Cuomo for helping to secure funding that will play an important role in helping to make our communities safer,” said Nassau County Executive Laura Curran.