Looking to Sell Your Home and Need Cash Fast? Leave the Key Homebuyers Can Get You Money in a Hurry

For over ten years, Leave the Key have specialized in buying homes for cash all over Nassau, Suffolk, Queens, and Brooklyn. 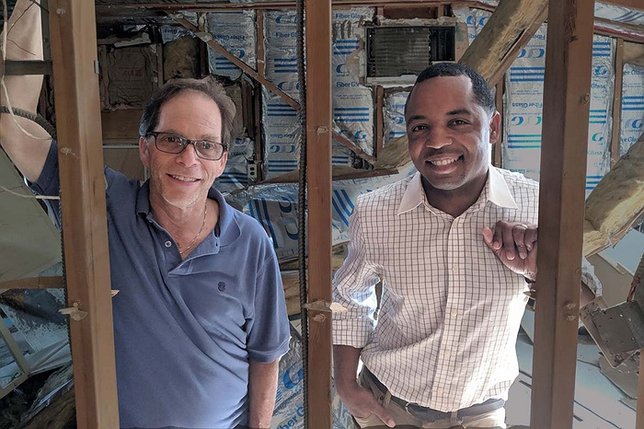 Leave The Key partners Larry Wagner and Jamell Givens inside a house they are flipping in Massapequa.

Photo by: Leave The Key Homebuyers

We’ve all been there - in possession of something we need to sell in a hurry and without any clear path on how to do it. While that situation can be stressful when it comes to a low-end item, imagine the stresses involved in having to do so with an entire house?
Well, that’s where Leave the Key Homebuyers of Amityville comes in. For over ten years they have specialized in buying homes for cash all over Nassau, Suffolk, Queens, and Brooklyn, often fixer-uppers – and making the process hassle-free, according to company partner Jamell Givens.
“We’re a real estate investment group that buys properties for cash and we help homeowners who need to get out of their homes quickly,” he said. “The reasons someone may need to sell their home quickly for cash are varied…it could be a pending foreclosure, divorce, an estate with heirs who don’t want to deal with the process, someone’s parents could be going into an assisted living facility…any number of reasons.”
Leave the Key Homebuyers has purchased hundreds of homes over the years in all price points and conditions.This year alone, they have acquired homes ranging in price from $55,000 to over $1 million. The cash paid to homeowners comes directly from Leave the Key, circumventing time-consuming bank approvals, appraisals, contingencies, minimizing the time it takes to sell your home and get cash.
Leave the Key Homebuyers often deals with homes that, while in overall good condition, may need to be renovated and/or brought up to modern design aesthetics. After purchasing such a home, their designers, architects, and contractors go over the property and renovate it thoroughly before it is put back on the market.
“A lot of these homes have been lived-in for 40-plus years, and they were just never updated. It doesn’t mean that they’re bad homes, but a lot of them are dated – specifically the bathrooms and kitchen – and today’s buyers are looking for the nice touches, such as light granite countertops and hardwood floors,” Givens said. “That’s where we step in…we bridge that gap.”
They also buy and fix up homes that suffer from physical distress such as damage from fire, flood, termites, mold, vandalization, or general disrepair. They have also purchased houses occupied by hoarders which have required as many as eight dumpsters. Givens said, “I was born and raised on Long Island and I want to breathe new life into these homes and neighborhoods.”
Givens spoke at length regarding the advantages of dealing with his company, as opposed to other investors who are actually wholesales, when it comes to selling a property quickly. Leave the Key cuts out the middleman and streamlines the process while keeping the transaction personal at all times.
“Wholesalers do a lot of legwork, but they’re mainly marketers…they usually don’t have the funding to do the deal themselves, and they normally will contact a company like us to close on the property. We have our own cash and the wherewithal to handle many projects at a time,” he said. “But if a seller deals with us directly, they cut out any fees the wholesaler would be charging them, leaving more money in the seller’s pocket. Most of those signs you see on telephone poles about buying homes for cash are wholesalers…if you call them and strike up a deal, they’ll call me right after.”
Ultimately, Givens noted that his job gives him a great deal of satisfaction, as often the services of Leave the Key Homebuyers are engaged by those in desperate need. He relayed one example from early in his career - a young woman with an infant reached out to Givens just prior to foreclosure with no other options. He was able to stop the foreclosure by purchasing her home, allowing her to regain financial stability.
“I was feeling good about this deal," he said. "I was only 22 years old and figured out how to make money and help people at the same time.”
Months later he received a letter from her stating how he had a monumental impact on her life and that she will never forget him. That letter was a “game changer” for him.
“I realized this is the business I want to be in for the rest of my life. I knew I had helped her but I did not realize the degree to which our meeting changed her life,” Givens said. "That was my second investment property and my business has been focused on helping homeowners solve issues ever since."
“We pride ourselves on honesty and doing good business,” Givens continued. “We try to give people as much as we can and we’re always happy to let them come back and see what we’ve done. As a result of our customer service, we get a lot of referrals and great reviews, and we take a lot of pride in that.”
In addition, Leave the Key Homebuyers is a full-service real estate company that owns and operates dozens of rental properties and a traditional real estate brokerage.
To find out more about Leave the Key Homebuyers, please visit leavethekey.com or call 631-388-7771.