Well-Known Humpback Whale Washes Up on Shore in East Quogue

The humpback whale that washed ashore on April 17 turns out to be Istar, who has been tracked for most of her life and is a celebrity in the world of marine biology. 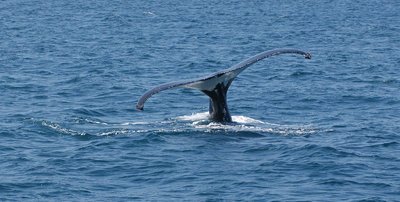 To many East End residents, it was sad enough to see the body of a nearly 48-foot-long humpback whale washed ashore in East Quogue last Wednesday, but to marine biologists, it was the loss of one of the most famous humpbacks to be tracked and studied throughout its lifetime.

Researchers tracked the female whale for over 40 years, and had named her Istar, after “Ishtar,” the Babylonian goddess of fertility, since marine biologists have tracked at least 11 of her offspring since the 1970s.  They have also monitored almost a dozen of the whale’s grandchildren.

When the carcass of the humpback first rolled ashore, local residents called the researchers at the Riverhead Foundation for Marine Research and Preservation, who at first did not recognize the whale as Istar.  Istar was never electronically tagged, but was instead identified by the distinctive markings on her fluke, or tail. While performing a necropsy, scientists photographed the unique pigmentation patterns on the underside of the fluke, and found the patterns to match those belonging to Istar.

When Istar was found, she weighed between 30 and 35 tons, and had been dead for at least a week.  Researchers are still looking into the cause of Istar’s death, but they said it was evident that she had massive cranial damage that is consistent with a ship strike.

Istar was first researched when she had her first calf, which was documented in the 1976 by the Provincetown Center for Coastal Studies in Massachusetts. She then continued to travel along the coast, spending April through December in Maine and heading to the Caribbean for the winter.

Humpback whales are an endangered species, but they are not uncommon to the waters around Long Island.  Humpbacks have been seen in the Long Island Sound, Block Island Sound, and Gardiner’s Bay, and come to the island in droves between June and September.

The last time a whale washed ashore in the area was in August 2012, when a finback whale estimated to have weighed 50 tons turned up just east of Tiana Beach in Hampton Bays.