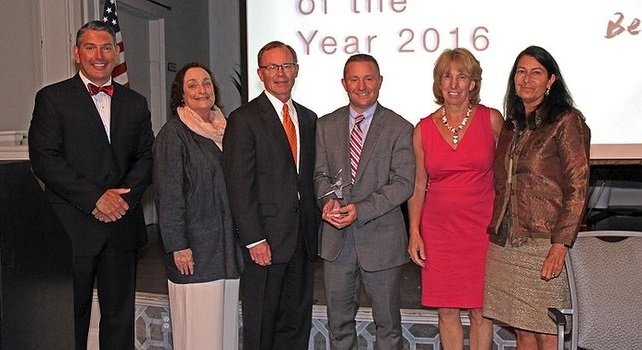 Greenport, NY - August 18, 2016 - Peconic Landing and East End Arts are proud to announce that music therapy program “Music by the Bedside” has been named LeadingAge New York’s 2016 Innovation of the Year.

The award distinguishes organizations that use creative problem solving to improve the quality and access of services for seniors, according to the advocacy group website. It was presented to Peconic Landing and East End Arts on August 18 by LeadingAge President and CEO James W. Clyne, Jr.

“This award recognizes organizations who are doing something different, something innovative and new that others can replicate,” said Jim Clyne during the awards ceremony. “This year the awards committee selected Music by the Bedside as the 2016 Innovation of the Year Award recipient. Congratulations!”

“Here at Peconic Landing, we’ve often found that through collaboration, true innovation is born,” said Robert J. Syron, President and CEO of Peconic Landing. “This program would not be possible without our friends and partners at East End Arts. This pioneering partnership has allowed us to take our music therapy program to the next level.”

East End Arts Education Director, Diane Giardi, approached Peconic Landing with the concept of the program after seeing the benefits of music for those receiving comfort care firsthand.

“We are so happy that in less than a year of initiating the program, Music by the Bedside has had such a significant impact on individuals, both residents and the music students and faculty participants involved,” said Diane Giardi, Education Director at East End Arts. “This one-on-one personal sharing of music by the bedside has added so much to the quality of life near the end of life. We are pleased that the program has been recognized in this way.”

“This is what I would call a win-win. It continues to be a tremendous experience for everyone involved,” said Gregory J. Garrett, Peconic Landing’s EVP and Administrator of Health Services. “ I want to thank East End Arts for their interest in the program and for making a difference in the lives of our members.”

Please visit Peconic Landing’s YouTube channel here (or below) an inspiring video depicting the benefits of Music by the Bedside.

East End Arts is a multi-award winning 501(c)3 not-for-profit arts organization serving the five East End towns of Long Island, NY since 1972, and operates a School of the Arts, an Art Gallery, and presents a variety of events and programs to promote the arts year-round. East End Arts is committed to building and enriching community through the arts by way of education, support, advocacy and inspiration. For more information about East End Arts visit www.EastEndArts.org.

Peconic Landing is a nationally recognized, not-for-profit Lifecare retirement community overlooking the breathtaking Long Island Sound. Located on the North Fork of Long Island, our 144-acre campus is bordered by grapevines and golfing greens, situated on a half-mile of private Sound beach. The community it home to the North Fork’s only Sculpture Garden, and serves as a cultural arts hub for the East End Community presenting ample opportunity for individuals to pursue their interests and passions to the fullest. For information about Peconic Landing visit www.PeconicLanding.org.