The Long Island Music Hall of Fame (LIMHoF) is proud to announce their 1st Annual Holiday Ball of Fame concert on Saturday, December 5, 2015 at 5pm featuring a live performance by Foghat. 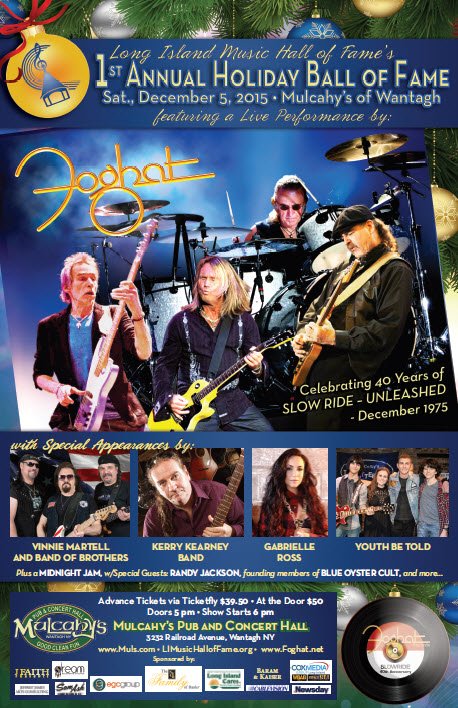 Melville, NY - November 6, 2015 - The Long Island Music Hall of Fame (LIMHoF) is proud to announce their 1st Annual Holiday Ball of Fame concert on Saturday, December 5, 2015 at 5pm featuring a live performance by Foghat. The concert will take place at Mulcahy’s Pub and Concert Hall, 3232 Railroad Avenue in Wantagh, with all proceeds to benefit LIMHoF’s education programs, scholarship fund and support the building of their first home and museum.

Tickets for will go on sale this Friday, November 6 at 10am EST.

This concert marks an exciting anniversary for headliner Foghat, who will be celebrating 40 years since the release of Slow Ride and their album Fool for the City. The band is eager to end the year with a celebratory performance on Long Island, their adopted home since moving here from England in 1973, and also help the non-profit Long Island Music Hall of Fame build their new home.

In addition to Foghat, the Holiday Ball of Fame concert will feature live performances by Vince Martell (LIMHoF Inductee and founding member of Vanilla Fudge) and his Band of Brothers, LIMHoF Long Island Sound Award recipient Kerry Kearney Band, rising Long Island artist Gabrielle Ross, and teenage rock and roll sensations Youth Be Told. The evening will be capped off by a midnight jam featuring many of the artists above as well as Zebra’s Randy Jackson, founding members of Blue Oyster Cult - The Bouchard Brothers, plus surprise special guests and other LIMHoF inductees.

LIMHoF Executive Director, Joe Jankowski said, "This is an exciting time in our celebrated history. We are thrilled to end 2015 surrounded by so many amazing artists that call Long Island home. You’re not going to want to miss this!"

This event will also highlight the Long Island Music Hall of Fame’s 1st annual instrument drive. The LIMHoF is seeking the donation of new or gently used instruments to benefit the Wyandanch Union Free School District and their newly created music program. Please bring your donations to Mulcahy’s or contact Joe Jankowski on email or 516-938-1626 to arrange advance pick-up.

For more information on LIMHoF / limusichalloffame.org
Long Island Music Hall of Fame (LIMHOF) is a 501(c)(3) organization dedicated to the idea that Long Island's musical heritage is an important resource to be celebrated and preserved for future generations. The LIMHOF was created as a place to inspire in each person the desire to explore and celebrate music in all its forms and to be a place where the music community will find the support, resources and leadership necessary to aim them in that exploration. Long Island Music Hall of Fame inductees include Billy Joel, Tony Bennett, John Coltrane, Mariah Carey, Neil Diamond, George Gershwin, LL Cool J, Carole King, Simon and Garfunkel, Run DMC, and many others.