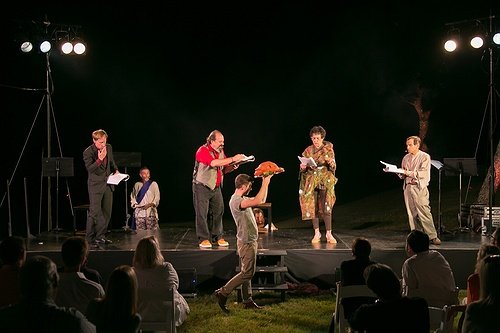 Sag Harbor, NY - August 18,  2014 - Bay Street Theater launched The Bay Street Shakespeare Initiative last weekend with the presentation of two outdoor staged readings of THE TEMPEST, directed by Scott Schwartz, and starring Tony Award winner John Glover as Prospero. This initiative is an ongoing program, which offers exciting performances and educational opportunities focusing on the work of William Shakespeare at Bay Street Theater.
On Saturday, August 16, Bay Street hosted a reading of The Tempest starring John Glover beginning at 7 pm at Mashashimuet Park in Sag Harbor. This reading was offered to the community at no charge.  There was seating in bleachers, but guests were invited to bring their own chairs, picnics and blankets to enjoy this special sunset production under the stars.
The second performance was a VIP benefit on Sunday, August 17 at a private waterfront estate. The event included a reception with the cast, and the evening began at 6:30 pm with cocktails followed by The Tempest reading.
“Bay Street is very excited to spotlight the work of William Shakespeare in our community. Considered by many to be the greatest playwright of all time, Shakespeare’s plays are as entertaining and relevant today as they have ever been. We are delighted to launch an initiative which we hope will make Bay Street Theater a center for the Bard’s work on the East End.”
The Bay Street Theater Shakespeare Initiative is offering supporters the opportunity to be a patron of the world of Shakespeare by sponsoring a character in The Tempest. Contact Bay Street’s Development office at 631.725.0818 for details.
The Tempest is one of Shakespeare’s most beloved plays, full of magic, mystical creatures, and love. Set on a remote island, it is the story of Prospero, the usurped Duke of Milan, as he employs magic and wit to restore his daughter Miranda to her rightful place.
Bay Street Theater is a year-round, not-for-profit professional theater and community cultural center which endeavors to innovate, educate, and entertain a diverse community through the practice of the performing arts. We serve as a social and cultural gathering place, an educational resource, and a home for a community of artists.
Photos of the outdoor readings of The Tempest by Lenny Stucker/lennystucker.com