The play fantasizes how a British consul named Henry Carr encounters some of the most famous figures of the 20th century. 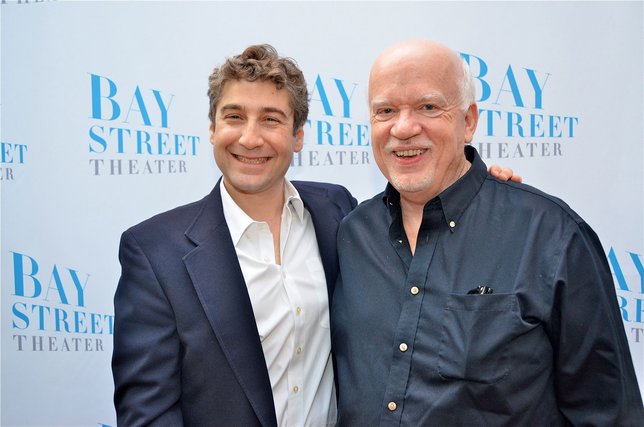 Sag Harbor, NY  - July 8, 2014 - Bay Street Theater is pleased to announce that the Tony award-winning comedy Travesties, by Tom Stoppard,  is now on stage through July 20. The production is directed by Gregory Boyd. Tickets can be purchased online now at baystreet.org or by calling the Box Office at 631-725-9500, 11 am to Showtime.

New this year, "Student Sunday" Matinees: Every Sunday through July 20, High School and College students can receive (1) FREE admission for the 2pm performance of Travesties. Also new this year is a $30 ticket for those under the age of 30.  Photo ID must be shown for both ticket initiatives.

With Travesties, Stoppard creates a smashing theatrical extravaganza with the wit of Oscar Wilde crashing headlong into song-and-dance, strip-tease, pie-fights, and brilliant wordplay. Set in 1917 and 1974 in Zurich, Switzerland, the play fantasizes how a British consul named Henry Carr (Richard Kind) encounters some of the most famous figures of the 20th century, including James Joyce, Tristan Tzara and Lenin, through an amateur production of  The Importance of Being Earnest. Stoppard takes on the role of the artist in society in this exuberant and freewheeling comedy about art and revolution that is as fresh and thought-provoking as it is uproarious.

Sir Tom Stoppard (playwright), born Tomáš Straussler; July 3, 1937, is a Czech-born British playwright, knighted in 1997. He has written prolifically for TV, radio, film and stage, finding prominence with plays such as Arcadia, The Coast of Utopia, Every Good Boy Deserves Favour, Professional Foul, The Real Thing, and Rosencrantz and Guildenstern Are Dead. He co-wrote the screenplays for Brazil, The Russia House, and Shakespeare in Love. Stoppard has received one Academy Award in addition to his four Tony Awards. Themes of human rights, censorship and political freedom pervade his work along with exploration of linguistics and philosophy. Stoppard has been a key playwright of the Royal National Theatre in London and is one of the most internationally performed dramatists of his generation.

Gregory Boyd (Director) is the Artistic Director of the Alley Theatre in Houston, Texas. During his tenure, the Alley has risen in national and international prominence, The theatre has won the Special Tony Award and experienced record growth in its Houston audiences, while also taking its productions to major European Festivals (including two in one season at the Venice Biennale), Broadway, and on tour to 40 American cities.

At the Alley, Boyd has produced over 100 new productions of the widest ranging repertoire in the country, among them the world premieres of Not About Nightingales by Tennessee Williams (Alley, London, Broadway), Jekyll & Hyde (Alley, National Tour, Broadway), and The Civil War (which he also co-wrote); Shakespeare’s Roman Plays (with Vanessa and Corin Redgrave); Robert Wilson’s productions of Hamlet, When We Dead Awaken and Danton’s Death (with Richard Thomas); O’Neill’s Long Day’s Journey Into Night with Ellen Burstyn, and Tony Kushner’s Angels in America, Parts 1 & 2, (both directed by Michael Wilson), premieres by Keith Reddin, Eve Ensler, Edward Albee, Horton Foote, Ken Lin, Rajiv Joseph and Theresa Rebeck. At the Alley, he has directed over 40 productions including: In the Jungle of Cities, Hapgood, Rock ‘n’ Roll, Cyrano de Bergerac, Treasure Island, Subject to Fits, After the Fall, and The Greeks. Directing projects outside the Alley have included Our Town at Hartford Stage (Hal Holbrook), Coward’s Design for Living at Williamstown (Marisa Tomei, Campbell Scott, Steven Weber), and the premiere of Pulitzer Prize winner Robert Schenkkan’s Lewis and Clark Reach the Euphrates at the Mark Taper Forum in Los Angeles. Most recently, he directed the premiere of Theresa Rebeck’s Fool at the Alley. Boyd was educated at the University of California, Berkeley, where he is a Distinguished Alumnus, and at Carnegie-Mellon. He is the recipient of an Outer Critics Circle Award, Connecticut Critics Circle Award, two Drama Desk nominations, two Tony Award nominations, and the Eisner Prize.

Audiences will recognize Michael Benz as Ethan Slade from Downton Abbey. He has also appeared in London’s West End in The Tempest and Rosencrantz and Guildenstern Are Dead. Other credits include the title role in Hamlet at Shakespeare’s Globe in London and US Tour (Helen Hayes Award nomination, Outstanding Lead Actor). Also at Shakespeare’s Globe: The Winter’s Tale, As You Like It, Love’s Labour’s Lost, and A New World. Additional stage credits include, Romeo and Juliet (Royal Shakespeare Company), Hay Fever (West Yorkshire Playhouse), Oohrah!, and The American Clock (Finborough Theatre, London). Television credits include, American valet Ethan Slade in Downton Abbey, BBCPrefaces to Shakespeare: As You Like It, Hamlet, The Tempest, Mike and Angelo (ITV), Little Lord Fauntleroy (BBC). Michael is a graduate of the Royal Academy of Dramatic Art and has a BA from Georgetown University, Washington, DC.

Isabel Keating On Broadway, Keating starred in The Boy from Oz (Tony Award, Drama League and Outer Critics Circle Award nominations, Drama Desk and Theatre World Award winner) opposite Hugh Jackman. Her other Broadway credits include Enchanted April, Hairspray and Spider-Man Turn Off the Dark. Off Broadway, she has appeared at Primary Stages, The Atlantic Theatre Company, Ensemble Studio Theatre and Rattlestick, among others. She won the Helen Hayes Award for Tom Stoppard’s Indian Ink at Washington, DC’s Studio Theatre, and has appeared regionally at The Old Globe, Hartford Stage, Long Wharf, Paper Mill Playhouse, the O’Neill Center, Williamstown among many others. Her films include The Nanny Diaries and Life Before Her Eyes. On television, she starred opposite Stanley Tucci in CBS’s 3 lbs. and opposite Vincent D’Onofrio in Law & Order: Criminal Intent.  Keating provided her voice for the Emmy Award-winning PBS American Masters Judy Garland: By Myself.

Richard Kind is an active member of Bay Street Theater’s Board of Trustees and has appeared on its stage most recently in Enter Laughing. Broadway credits include, The Big Knife (Drama Desk Award Winner for Best Supporting Actor and nominated for a Tony for Best Featured Actor in a Play), The Producers; Dirty Rotten Scoundrels; Sly Fox; The Tale of the Allergist’s Wife; Sondheim’s Bounce! (Goodman Theatre and Kennedy Center), Candide (New York City Opera at Lincoln Center); The Lady in Question, Rough Crossing, Romance (Bay Street Theater); Once in a Lifetime (Guthrie Theatre); Rosencrantz and Guildenstern are Dead, The Front Page (Williamstown Theatre Festival); Power Failure (Actor’s Studio Free Theatre Co.); The Seagull (Matrix Theatre); The Second City in Chicago, New York, and Los Angeles; Working, All in the Timing, Things You Shouldn’t Say Past Midnight, 12 Angry Men, Synergy, and An Enemy of the People (LA Theatre Works).  Film Credits include Argo, Obvious Child, Angriest Man in Brooklyn, Hereafter, A Serious Man, The Visitor, The Grand, Cars, The Station Agent, A Bug’s Life, Mr. Saturday Night, Cars, and Toy Story 3. On television, he has been seen as a series regular on Luck, Spin City, Mad About You, and Carol Burnett & Co., with many guest appearances including Scrubs, Curb Your Enthusiasm, Harry’s Law, Good Wife and Glee.

Emily Trask credits include Twelfth Night, and The Gaming Table (The Folger Theatre), Tartuffe, Christmas Carol, Pirandello's Yes. No. Maybe So..., Chaps!, and the world premiere of Armadale (The Milwaukee Rep), The Tempest ( Pioneer Theatre Company). Trask is also known for work at The Yale Rep, Yale Cabaret, The Colonial Theatre, and a five season company member with Utah Shakespeare Festival.  In NYC Emily has participated in productions/readings with Lincoln Center, The Lark, Three Day Hangover, Titan Theatre Co. etc.  She can also be heard as Juliet in Romeo and Juliet and Ophelia in Hamlet on The Folger Library's audiobooks/Shakespeare app, and seen in the new Alison Krauss/Sandra Boynton music-video, End of a Summer Storm.  Trask received a BA from Grinnell College, and her MFA from The Yale School of Drama.

The 2014 Mainstage Season is sponsored in part by New York State through the generosity of Assemblyman Fred Thiele and State Senator Kenneth P. LaValle; the New York State Council on The Arts, a State Agency; Town of Southampton; The Harold and Mimi Steinberg Charitable Trust; The Shubert Foundation; and the Suffolk County Executive’s Office.

Bay Street Theater is a year-round, not-for-profit professional theater and community cultural center which endeavors to innovate, educate, and entertain a diverse community through the practice of the performing arts. We serve as a social and cultural gathering place, an educational resource, and a home for a community of artists.