While most 13-year-olds are just beginning to learn about WWII in their history classes at school, Matthew McGaughan is living it. 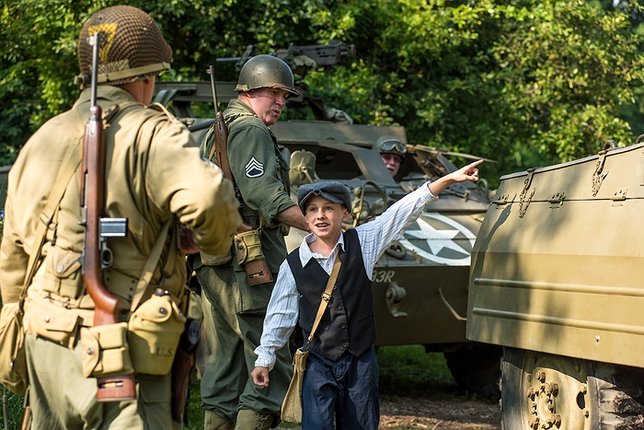 Old Bethpage, NY - August 15, 2018 - Across the United States, museums use living historians to interpret and present a unique chapter in history. However, the Museum of American Armor at Old Bethpage Village Restoration may be the only one depending on a 13-year-old to set the scene of “France – 1944.”
While most 13-year-olds are just beginning to learn about WWII in their history classes at school, Matthew McGaughan is living it. This Saturday, August 18, it will be up to young Matthew to guide the weary G.I.s (including his father Jim) through the backroads of the French countryside on their way to liberate Normandy in his pivotal role as a young but earnest member of the French Resistance. In period civilian clothes sewed by his mom Kim, and using hand gestures and a smattering of French (very smattering), Matthew warns the American soldiers that “the Boche” are just down the road setting up an ambush.
Civilians embedded in an American armor column travel inside the county preserve wearing helmets and tanker jackets until the patrol comes to a screeching halt as Matthew appears to warn of the hidden danger. Before long, blanks are fired, propane cannons roar and the civilians get a better understanding of what great grandfathers did as 18-year-old boys some 70 plus years ago. While Sherman tanks rumble past and “prisoners” are interrogated by G.I. reenactors, it is Matthew’s role upon which the story turns.
This month’s event takes place this Saturday, August 18. For more information, click here.