PSAs Airing in NY and Nationwide Will Enhance Governor’s Efforts to Crack Down on Distracted Driving this Summer. 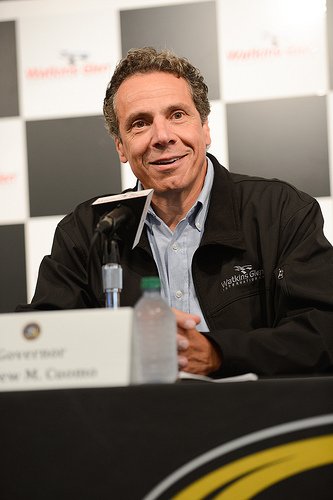 Albany, NY - August 9, 2013 - Governor Andrew M. Cuomo today announced a partnership with International Speedway Corporation to launch a PSA campaign urging Americans all across the country "don't text and drive." Governor Cuomo and Watkins Glen International President Michael Printup made this announcement today to kick off this weekend’s NASCAR Sprint Cup and Nationwide Series at Watkins Glen International racetrack. The campaign, featuring Printup and top NASCAR racers, includes one PSA for New Yorkers that will run at this weekend's events, as well as one to be aired at various NASCAR events nationwide.

"I am thrilled that International Speedway Corporation (ISC) is joining with our efforts to fight distracted driving here in New York and all across the country," Governor Cuomo said. "With millions of fans, NASCAR is the perfect platform to promote safe driving habits – because when these professional racers tell you texting-while-driving is a dangerous and serious problem, you listen. These PSAs will be shown at events nationwide, and I am confident that they will enhance our work in New York to stop this epidemic and ultimately save lives. By working together with these top organizations, we can help keep our roads and highways safe for all."

"We are pleased to partner with Governor Andrew M. Cuomo to launch this PSA that will run throughout this weekend's Cheez-It™ 355 at The Glen as well as the remainder of the 2013 ISC events," International Speedway Corporation President John Saunders said. "ISC is very proud and fully supportive of WGI for initiating this important partnership and are pleased to do our part to reduce the dangerous practice of texting-and-driving – an issue that affects Americans every day."

Under this partnership with International Speedway Corporation, the PSA campaign will enhance not only Governor Cuomo’s efforts to fight distracted driving here in New York State, but also all across the country.

Distracted driving is an issue that affects public safety in New York and nationwide. Here in New York, earlier this year, Governor Cuomo directed the state Department of Motor Vehicles (DMV) to implement tougher penalties for distracted driving for all drivers. On June 1, 2013, DMV increased the number of points earned against an individual’s driving record upon conviction for texting-while-driving and cell-phone related infractions from three points to five points. New and increased fines for distracted driving violations were also passed as part of the 2013-14 state budget and recently went into effect

On July 1, 2013, the Governor signed legislation that he spearheaded creating new penalties for distracted driving for young and new drivers. The new law which was effective immediately imposes the same penalties on drivers with probationary and junior licenses for texting-while-driving and using a hand-held cell phone that they had received for speeding and reckless driving: 60-day suspensions for first convictions and revocations of 60 days (for junior licenses) or 6 months (for probationary licenses) for subsequent convictions within 6 months of the time a license is restored after suspension.

This summer, at the Governor’s direction, the New York State Police is undertaking a major crackdown on distracted driving. The up to $1 million effort consists of significantly increased enforcement and patrols, particularly through undercover operations using unmarked State Police SUVs to catch irresponsible drivers.

The Glen is one of only two stops on the NASCAR Sprint Cup schedule where the drivers have to turn right. The track was long known around the world as the home of the United States Grand Prix, which it hosted for 20 consecutive years from 1961 to 1980, and has been home to road racing of nearly every class for over 50 years.

Cheez-It™ 355 at The Glen is the marquee event of the August 8-11 weekend at Watkins Glen International. Racing starts Saturday with the NASCAR Nationwide Series Zippo 200 and continues with Sunday’s Cheez-It™ 355 at The Glen. Run under the title Finger Lakes 355 at The Glen in 2012, “355” signifies the distance of the NASCAR Sprint Cup Series race 90 laps for 220.5 miles in kilometers. Racers will start their engines for the Cheez-It™ 355 Sunday afternoon and the green flag is scheduled to drop at 2 p.m., kicking off one of professional racing’s most exciting events.