Theresa is a Mother is scheduled to screen at this year’s Long Island International Film Expo in Bellmore, Long Island. 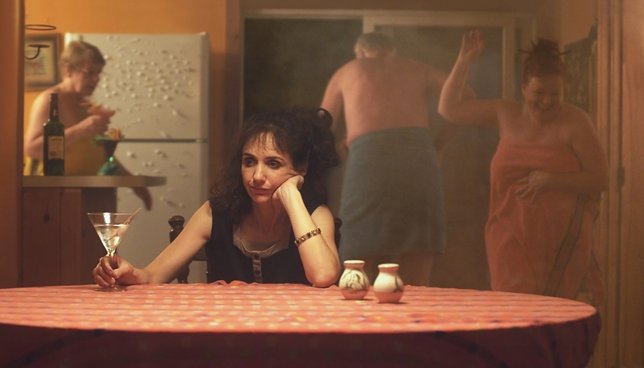 Theresa is a Mother is a dramatic comedy focused on single mom, singer/songwriter punkish wannabe Theresa McDermott.  Theresa has chased her “ideal” life as an urban-dwelling musician to the very end of its possible existence.  She is broke, options have run out and she happens to have a few kids she is raising on her own since their dad split a year ago.  Facing eviction and nowhere to go, Theresa packs up her children and what is left of her life and moves back to the small rural town, childhood home and parents she deliberately ran from a decade ago.  Her parents’ mutual misery and depressingly gloomy lives were a “downer” she felt had no place in her fun city life.  Yet from the moment Theresa drives back up her old driveway, it is clear that there have been some major changes. Her parents, armed with a plethora of hobbies, a hot tub and a new philosophy, are not exactly the old folks she left behind.  Theresa needs a job, her parents need their space and a painful family history needs some closure.  Old wounds, unattainable dreams, and some “other things” are exposed as a fractured family works to become whole and a woman with a few kids learns to become a mother.

“This film is a real family affair” says co-director and producer Darren Press. “My wife, C. Fraser Press wrote the screenplay, co-directed and starred in the film and our three girls played major roles in the ensemble cast.  Our oldest Schuyler (12 at the time of shooting) also wrote and recorded the main theme song.” Press continues, “We did not originally plan to have them in the movie however we figured having them on set was cheaper than babysitting, so we did it and it was an incredible experience for all of us.”

Theresa is a Mother has received great praise from critics and the film industry largely due to a well-crafted script and fine directing and acting.  This is a story that resonates for audiences of all ages and offers moviegoers a rare wonderful comedic and dramatic relatable story.

The West Orlando News wrote: “Between the genuine script and the excellent acting, this movie will leave you laughing throughout while pulling your heartstrings making it hard to fight back the tears. Every scene in this film showed the Press family as masters of storytelling, but what really makes this film enjoyable are the heartwarming emotions, genuine dialogue, and convincing characterization by every actor. “Theresa is a Mother” proves to be a captivating feature film that will resonate with diverse audiences. A remarkable independent feature film worth watching – don’t miss it.”

Theresa is a Mother plays at the Bellmore Movies on Wednesday July 24th at 5pm.  For more information about the film, please contact Darren Press at Darren@amspe.com.  For tickets to the Long Island International Film Expo please contact 516 571-3168 or debfilm@aol.com

About the Production Company A May Sky Picture Entertainment:AMSPE is an entertainment production company founded by writers, producers and directors C. Fraser Press and Darren Press.  AMSPE’s first project was the short film A Driving Lesson – featured in over 30 film festivals wordwide and nominated for and winner of numerous film festival awards. A Driving Lesson was also a Glamour Magazine web film series official selection which screened short films from up and coming directors. AMSPE’s first feature film Theresa is a Mother has won 4 Best Film awards and continues to screen in festivals around the world. AMSPE has also developed and workshopped the new musical What I’m Failing to Learn in NYC to great reviews and is further developing the project for a theatrical run. AMSPE is focused on developing material for the Film, TV, Web and Music industries.