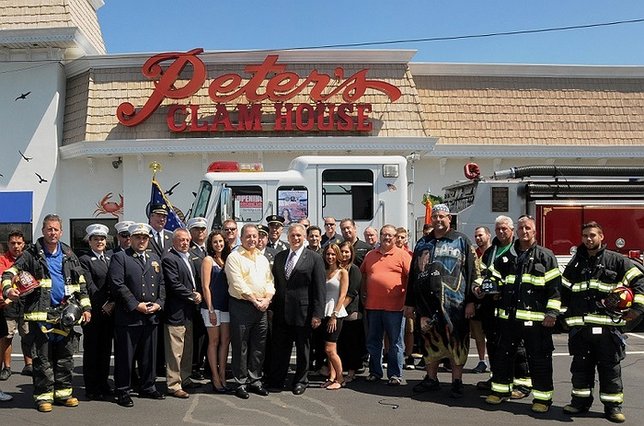 Pictured is the Annual Long Island Clam Eating Contest from an earlier year.

Jarvis has been part of the Nathan famous Hot Dog Eating Contest and holds various eating World Records. He will be coaching firefighters from across the region as they chow down on thousands of clams.  The current World Record for clam eating is 26 dozen Cherrystone Clams in 6 minutes set at Peter’s Clam Bar in 2010.

The Clam Eating Contest will be held at Peter’s Clam Bar where firehouses from Island Park, Long Beach, Lakeview, Baldwin, Point Lookout and East Rockaway will be sending some of their best eaters to compete for cash prizes.  In addition to the firehouse contest, there will be an open contest for the public.

Long Island's history, culture and traditions are closely linked to clams. The first coastal inhabitants of New York called Long Island the "Island of Shells" in recognition of the vast numbers of clam, oyster and other shells deposited on its shore.  According to the New York Seafood Council in the 1970s more than half of the clams eaten in the United States were from Long Island at their peak population, clams filtered 40 percent of the water within the bay and contributed over $100 million to the local economy.  Peters Clam bar has served the Long Island community for over 75 years.