Zeldin: "This was a great opportunity to discuss the many ways to support business and spur economic growth, as well as the importance of maintaining local infrastructure." 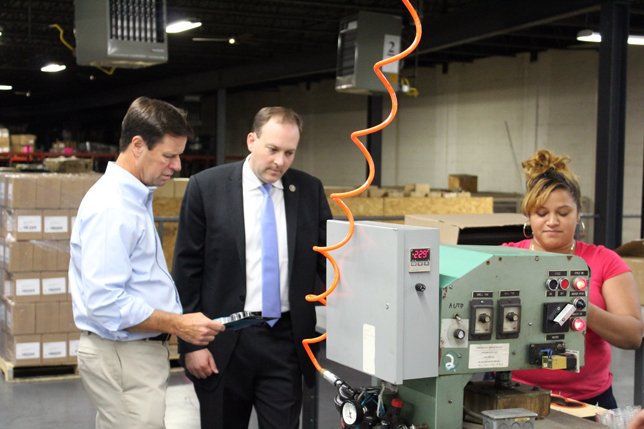 Hauppauge, NY - August 11, 2017 - On August 10, 2017, New York Congressman Lee Zeldin (R-NY-01) visited bicycle product manufacturer Finish Line Technologies to learn more about the economic impact of the $88 billion U.S. bicycle industry and to discuss important federal policies that affect bike business. Throughout the month of August, PeopleForBikes is coordinating tours of bike industry companies and bicycle retailers.
Hank Krause, Founder and President of Finish Line Technologies, used the tour as an opportunity to thank U.S. Representative Zeldin for his work on the Transportation Alternatives Program (TAP) -- the largest source of federal funding for bicycle infrastructure. In 2015, Congress passed the FAST Act, a five-year reauthorization of the surface transportation bill, which included TAP. The FAST Act provides $835-$850 million in TAP funding in each of the next five years for a total of more than $4 billion in bike and pedestrian infrastructure investments. Congressman Zeldin was also instrumental in securing funds for the Recreational Trails Program, which develops and maintains trails for both nonmotorized and motorized recreational uses. It is another important program to helping meet the demand for recreational riding opportunities across the country.
“I would like to thank Finish Line Technologies, for hosting me for a tour of their facility in Hauppauge, as well as PeopleForBikes, for coordinating this visit and all the excellent work they do for our communities,” said Representative Zeldin. “This was a great opportunity to discuss the many ways to support business and spur economic growth, as well as the importance of maintaining local infrastructure. There is so much that can be done to improve our bicycle industry and the infrastructure it depends on, and I am proud to do my part as a Member of Congress.”
The tour also highlighted the contributions Finish Line Technologies is making to New York. Finish Line Technologies employs 40 people at their headquarters in Hauppauge, where they manufacture bike lube and other products that are sold worldwide. Finish Line Technologies is just one of the many bike businesses in New York’s First Congressional District, which is home to three bike equipment manufacturers, 29 bike retailers, and 1,135 PeopleForBikes members.
“Federal funding for bicycle infrastructure is important because it spurs economic growth,” said Krause. “More safe places to ride result in more demand for bikes and bike products like ours. It was an honor to host Congressman Zeldin and we thank him for his leadership on cost-effective bike infrastructure investments.”
These congressional visits are part of PeopleForBikes’ summer campaign designed to showcase the economic impact of bike businesses. “We can tell members of Congress about the power of the bike industry over and over, but nothing can compare to seeing it in-person,” says Jenn Dice, PeopleForBikes’ vice president of government relations. “When elected officials and their staffers meet employers and retailers, a personal connection is created. Our goal is to build on this and develop more champions in Congress who will support funding for TAP and RTP.”
Although there is bipartisan congressional support for bike infrastructure projects, threats continue. Earlier this year, the Trump Administration proposed a budget that would eliminate the Transportation Investment Generating Economic Recovery (TIGER) program, which has helped communities across the nation improve infrastructure -- including bike paths and lanes. Highlighting the state and local economic contributions of the bike industry to U.S. Senators and U.S. Representatives will help secure their ongoing support for this program and others.
A total of 10 visits in six states are scheduled this summer so far. PeopleForBikes plans to coordinate this program annually during the traditional August recess. To get involved and to host your member of congress or their staff email Lander Karath at lander@peopleforbikes.org.
About PeopleForBikes
PeopleForBikes is uniting millions of individuals, thousands of businesses and hundreds of communities to make bike riding better for everyone. When people ride bikes, great things happen. Learn more at PeopleForBikes.org.
About Finish Line Technologies
Finish Line Technologies is recognized as the world’s leading manufacturer of specialty bicycle lubricants and related maintenance products. The company is a market leader in over 50 countries and its products are produced in 15 languages. Finish Line products are used by many of the world’s leading mountain bike and WorldTour teams. Finish Line is committed to research and development for both professional and recreational riders and a keen sensitivity to health, safety, and environmental concerns.