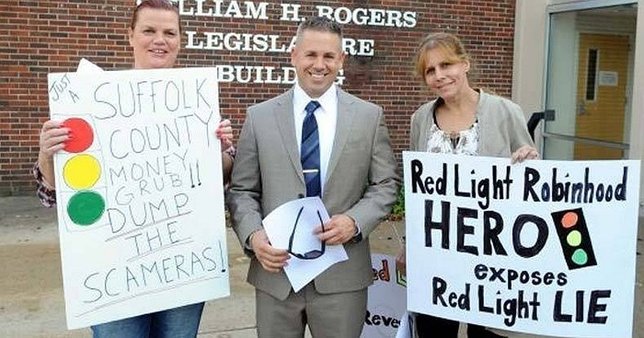 Stephen Ruth, pictured outside of the Suffolk County Legislators Building with supporters of his crusade against red light cameras in May of 2016.

Stephen Ruth, the infamous “Red Light Robin Hood” who has waged a very public one-man war against Suffolk County’s controversial red light camera program, is now making headlines yet again for a very different reason; he’s asking local residents to come out this Friday to help support his bid for a most surprising of aspirations- a foray into politics as he pursues the New York State Senate District 2 seat.

Ruth, a Centereach resident, will be collecting signatures of registered voters for a petition to be included on a ballot for the upcoming elections this November. Ruth plans on standing out in the oppressive August heat from 11 a.m. to 3 p.m. at the 7-Eleven at 454 Veterans Highway and Harned Road in Commack this Friday, August 12, and is asking the community for its support.

“I'm gathering signatures to get on the ballot to run for State Senate in District 2...God willing, if I get enough signatures, I'll be allowed to run,” he said.

“I was nominated by the Libertarian party about four months ago to run…I was approached and asked to do it, and when I asked my mother, she told me to go for it. She said if I've been willing to do everything that I've done so far based on my willingness to defend the people who can’t defend themselves, what better place to be able to do it then the State Senate?”

Ruth, has received extensive coverage in the media based on his extremely provocative stance on Suffolk’s red light camera program, which was first introduced in 2009. Launching with 50 strategically-placed cameras throughout Suffolk County which automatically took pictures of the license plates of motorists who ran red lights – who later received an $80 ticket in the mail – the stated goal by officials was the safety of local residents traveling the roadways.

Ruth first entered the public eye in August of 2015 after filming himself sabotaging one of the cameras and posting the video to YouTube, all while claiming that the devices were more about generating revenue for Suffolk County than protecting lives. He even went so far as to allege that yellow lights in intersections governed by the cameras had been shortened to artificially increase offences – and, in effect, revenue for the county – while also increasing accident and injury rates as well.

Ruth was subsequently arrested for his sabotage of a single camera, but where most people would have backed off, he doubled down; in April of 2016, he disabled 19 more cameras in a single weekend by cutting their video cables, and actually bragged about his deed afterwards to the local news. He was arrested again, and while no court dates have been set yet for either offence, Ruth is nonetheless more than confident that he will eventually prevail.

“We're going to win. These cameras are unconstitutional, and they are illegal and dozens of other states, so why shouldn't they be unconstitutional and illegal here?" he said. "We have a tremendous amount of evidence in my defense, we have police officers willing to testify, firemen, EMTs, even engineers willing to testify that Suffolk County has shortened the yellow lights and that the red light camera system is all about money. They have nothing to do with safety whatsoever.”

Ruth noted that his run for State Senate was inspired by the opposition he said that he encountered from local government in regards to his efforts against the red light cameras; however, he said that he was also inspired by the groundswell of support he received as well, including from law enforcement and much of the public at large.

“I know that the Republicans are attacking me after I went after a Democratic program in Suffolk County, so I knew that there was more than one party conspiring against the people,” he said.

“No Libertarian has ever been elected to office in New York State, and God willing, I'll be the first one. They're not a corrupted party...they’re for less government, more freedom, and for everyone to respect each other and treat each other how they would like to be treated.”

Ruth said that so far he's collected approximately 7,000 signatures and supporting his election bid and counting, and is hoping for a good turnout on Friday to help put him over the top – he’s hoping to reach over 10,000 John Hancocks – in his quest for a State Senate seat.

If elected, Ruth plans on addressing Suffolk County’s homeless issues and abolishing both red light cameras and the controversial Common Core learning standards in schools. Ruth also touched upon property tax issues facing many Suffolk County residents, and said that coming down to 454 Veterans Highway on Friday, August 12 and signing his petition will help the public gain a true and steadfast ally that will fight against out-of-control bureaucracy and corruption in local politics.

“If you want to see this abuse continue, then don't come down tomorrow, but if you want to make a change, come on down and support somebody that's going to fight for you...that's me,” he said.

“I took the fight to Suffolk County, and sheriffs, police officers, and correction officers are all behind me...today I even got signatures from police officers pulling up in their squad cars. So if they have the courage to come down and sign my petition, everyone should do it.”