On Saturday evening, September 13, 2014, Long Island Voices will team with Sound Symphony for a benefit performance. 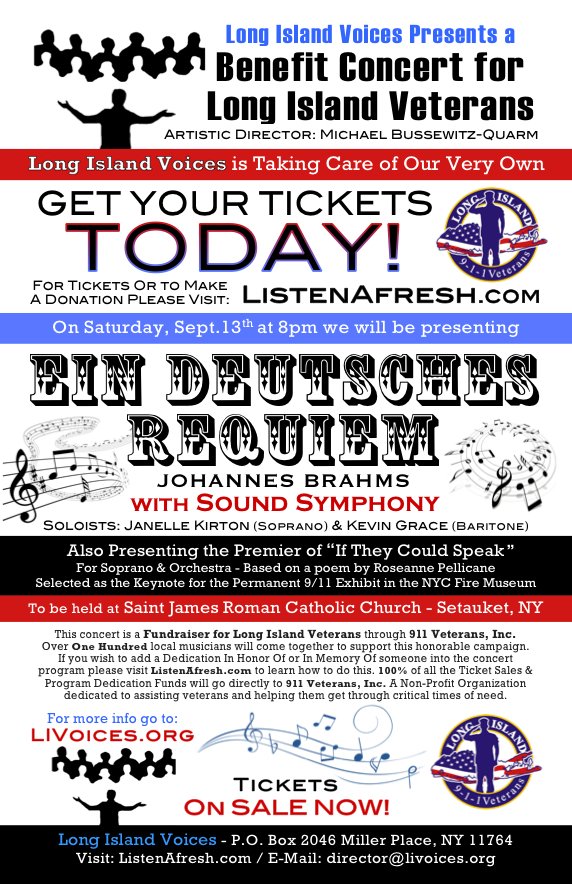 “Our neighbors go to the front lines, see incredible atrocities and often come home wounded. Sometimes these wounds are not visible, and can take years to recover from. The musicians of Long Island Voices feel it’s important to be there for them when they need us and 911 Veterans does this in an amazing way,” says conductor Michael Bussewitz-Quarm.

Also featured at this concert will be the premiere of Bussewitz-Quarm’s choral adaptation of Rosanne Pellicane’s poem, If They Could Speak. The poem was chosen as the keynote for the permanent 9/11 exhibit at the New York City Fire Museum to honor the 343 firefighters who were lost at the World Trade Center.

Bussewitz-Quarm is no stranger to helping our veterans. In 2010 he organized over 50 volunteer singers to premiere his choral work, “Dies Magna”, written in honor of the first responders lost in the attacks on the World Trade Center. The following year, another 80 local musicians formed the Long Island Voices and Orchestra. Under his leadership, the ensemble was able to raise over $14,000 for 911 Veterans, Inc.

Tickets can be purchased at  ListenAfresh.com. Additional information on the concert or how to donate to it may be found by emailing Director@LIVoices.org, by calling 631-403-0890, or “liking” them on their Facebook page. Tickets for the concert are available on a “Pay As You Are Able” basis at the $5.00, $10.00, and $20.00 levels, with additional options for those wishing to contribute more.