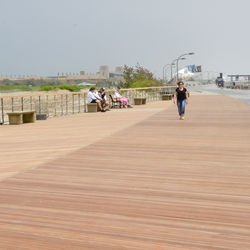 Albany, NY - August 4, 2015 - Governor Cuomo announced more than $6.2 million in grant awards to help 16 historically significant properties repair severe damage from Superstorm Sandy in 2012. This is the second round of funding announced by the Governor to rehabilitate historic landmarks damaged in the storm.

“Many of New York’s historic properties endured the devastating effects of Superstorm Sandy and as a result, have fallen into a state of disrepair,” Governor Cuomo said. “With this funding, we are helping our communities rebuild these New York State treasures back stronger and more resilient than before. In the end, they will better withstand the threat of future storms and continue to serve as economic and educational assets in their communities.”

“Many historic places continue to struggle with the harsh impact of Superstorm Sandy,” Office of Parks, Recreation and Historic Preservation Commissioner Rose Harvey said. “Under the Governor’s leadership, State Parks is part of the effort to assess, renovate and protect landmarks that are so important in our state’s history.”

The grants will aid in the recovery of some of the region’s most significant historic properties, including the Fraunces Tavern, a gathering place for Revolutionary War-era patriots such as George Washington, Alexander Hamilton and John Adams that is now a popular historic museum in Manhattan and Old Westbury Gardens in Westbury, a premier example of a Long Island “Gold Coast” country estate and a leading Long Island heritage tourism destination. The scenic Evergeens and Green-Wood Cemeteries in Brooklyn are the final resting places of numerous prominent New Yorkers including composer Leonard Bernstein, journalist Horace Greeley, abolitionist Rev. Henry Ward Beecher, artist Jean Michel Basquiat, cartoonist Walt Kelly and eight victims of the Triangle Shirtwaist Factory fire.

Grants are being made available to properties that are on or eligible for listing on the National Register of Historic Places, owned by municipalities or not-for profit organizations and located in one of 13 FEMA-designated counties. Work must meet the Secretary of the Interior’s Standards for Treatment of Historic Properties and be pre-approved by the State Historic Preservation Office. The program isfunded by the National Park Service and administered by the New York State Office of Parks, Recreation and Historic Preservation.

The projects are the second round of funding under the program. Last year, Governor Cuomo announced more than $5 million was awarded to 14 historically significant properties that suffered severe damage from Superstorm Sandy.

Congressman Eliot Engel said,“Superstorm Sandy took a heavy toll on areas of the Long Island Sound, particularly Rye, which is still recovering from the damage almost three years later. The roof of the Palmer Tennis House at the historic Jay Heritage Center endured significant damage in the storm, and as a result was in desperate need of repairs. Now, thanks to Governor Cuomo’s allocation of $391,056 in grant money to the Center, the roof can be stabilize and restored, and this historic property can once again be enjoyed by everyone in the Rye community and beyond.”

Rep. Jerrold Nadler said, “The devastation of Superstorm Sandy continues to have an effect on thousands of New Yorkers whose homes, businesses and property were destroyed or irrevocably damaged. Immediately after the disaster we fought to secure the necessary emergency funding from the Federal Government to help with recovery and rebuilding, but there remains a tremendous amount of work that still needs to be done. I am glad we were able to bring these federal funds to restore such important New York historic sites; ensuring that they will continue to be enjoyed and valued by their local communities and the public at large for years to come.”

Congresswoman Kathleen Rice said,“Superstorm Sandy affected all aspects of life on Long Island – from homes and small businesses, to the historic sites and state parks that are so important to our culture and our local economy. This funding for crucial repairs at Jones Beach State Park represents another important step in our ongoing efforts to rebuild and recover from the damage that Sandy inflicted on Long Island’s communities.”

Congressman Steve Israel, “Our historical landmarks and buildings took a powerful hit from Superstorm Sandy and many of our communities in Nassau County, and across Long Island are still struggling to recover and rebuild. This federal and state partnership will ensure we are rebuilding and protecting our historical sites for future generations of New Yorkers to enjoy.”

Congresswoman Carolyn B. Maloney  said, “There are so many historic buildings that were damaged by Superstorm Sandy, but are still in need of repairs. I worked to support federal funding to restore historic landmarks, and I’m pleased to see the resources flowing to so many important properties. I applaud Governor Cuomo for his leadership and for making the full recovery from Sandy a top priority.”

Congressman Lee Zeldin said, “When Superstorm Sandy hit, our Long Island community was left in disarray. Long Island's culture is rich in history; and the federal, state and local governments are working together to protect and restore our historic sites, like Taylor’s Island in Shelter Island. This is a key victory for Shelter Island and I am honored to be a part of it.”

Awards under the second round of funding include:

BROOKLYN
The Evergreens Cemetery Landscape Restoration – $1.3 million (two grants)
The Evergreens Cemetery, established in 1849, experienced severe winds during Sandy, causing trees to fall and crush monuments and gravestones. The $1 million grant will help the cemetery remove debris from toppled trees, complete landscape restoration and repair monuments and gravestones. The Evergreens Cemetery Preservation Foundation will also receive a $320,000 grant to commission a cultural landscape report to assess damage to the landscape, and provide short-term and long-term treatment plans. In addition to the 800 burials taking place at the cemetery every year, it also serves as a place where visitors can take stroll or jog enjoying nature in a surrounding urban environment in Brooklyn.

Lehigh Valley Barge No. 79 Restoration Project – $269,274
Situated in the port in Red Hook, the Lehigh Valley Barge No. 79 sustained heavy damage during Hurricane Sandy. Work will include to repair the planking, raise the height of the protective sheathing on both the bow and stern to better protect the boat, re-caulk all hull planking above the waterline, replace deteriorated wooden rubbing timbers, repair deteriorated walkways and apply waterproofing. Barge 79, now a waterfront museum, represents the only surviving all-wooden example of the Hudson River Railroad Barge that remains afloat and accessible to the general public.

Lookout Hill Restoration Project -- $488,228
Lookout Hill, a centerpiece in the Frederick Law Olmsted and Calvert Vaux designed 1870 Prospect Park in Brooklyn, lost approximately 500 trees and suffered severe damage to the wooded slopes of Lookout Hill. The project will involve removing all fallen material and stabilizing the slope to buffer against future storms and foot traffic. The park receives millions of visitors every year with many walkers, runners and birders using the park regularly.

Fraunces Tavern Museum Electrical System Upgrades – $587,550
Due to the flooding of the basement and first floor, the electrical system corroded from the saltwater residue. The proposed work will include replacing all electrical wiring, conduits, lighting fixtures, fuses, electromechanical circuit breakers and switchgear. This work is crucial to provide a safe environment at this heavily visited historic site and museum. Originally constructed in 1719, the Fraunces Tavern was the meeting place of legendary patriots such as George Washington, Alexander Hamilton and John Adams. In 1783, Washington wished his Continental Officers farewell on the tavern’s second floor.

During Sandy, high winds caused heavy cornice stone to dislodge from the north main entrance onto the walkway. The grant will reimburse Nassau County for work to anchor and stabilize the dislodged stones back into their preexisting location. As a mitigation measure, stones that appeared compromised and appeared as a potential danger of dislodging were anchored and stabilized.

Saddle Rock Grist Mill Structural Assessment – $17,580
Nassau County will conduct an engineering study on the structural integrity of the Saddle Rock Grist Mill in Great Neck after the effects of Superstorm Sandy. Until the building can be restored, public access is prohibited due to public health concerns. The Grist Mill, originally constructed circa 1700, serves the public an educational tool and is one of the last tidal powered mills.

Oak Beach Community Center Repair and Restoration – $132,238
The Town of Babylon will repair the Oak Beach Community Center, a former historic Lifesaving Station associated with Long Island’s maritime history. Flood waters penetrated and lifted the structure off its foundation. The proposed exterior work will include repair to the roof, chimney, windows and siding. Interior work will include first floor insulation, plumbing upgrades, well pump and piping replacement, and a new HVAC system to properly control the climate to protect documents.

Taylor’s Island South Seawall Replacement Project – $350,000
Taylor’s Island serves the public as an outdoor recreational and educational attraction for hikers, swimmers and boaters. Taylor’s Island and its seawalls help protect the National Register-listed Smith-Taylor Cabin. During Hurricane Sandy, water came over the south concrete seawall to within 20 feet of the cabin. The Town of Shelter Island is proposing to design and install a new natural boulder seawall that is capable of withstanding expected tidal surge and wave action.