The RAVE App is critical in response to active shooter situations. 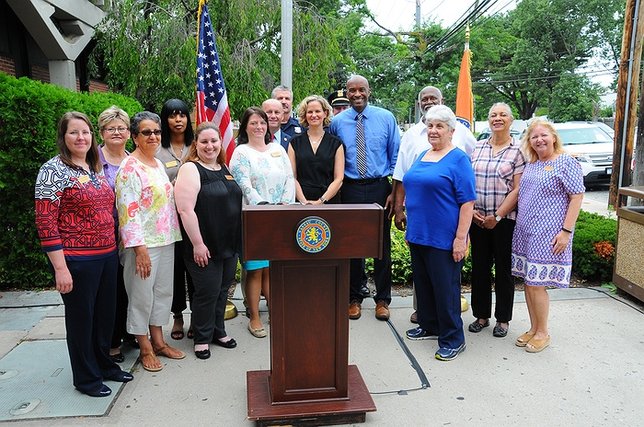 Uniondale, NY - August 3, 2018 - Nassau County Executive Laura Curran this week joined Minority Leader Kevan Abrahams, Police Commissioner Patrick Ryder and Karen Farrell , Uniondale Public Library Administrator, to announce that 54 libraries county-wide will have the RAVE Panic Button System installed in their facilities.
“Too often we see the headlines of active shooter events,” said County Executive Curran. “In fact, according to Gun Violence Archive, a total of 188 mass shooting incidents have occurred as of July 23 of this year. One is too many. The RAVE App is critical in response to active shooter situations and will protect patrons while generating a faster response to emergencies. The RAVE Panic Button System does not replace 911 but will assist greatly with response time and essential monitoring of the situation.”
“Our public educational resources – where residents gather to learn and expand their horizons – can be targets for those who are trying to infringe on our freedoms,” said Minority Leader Abrahams. “Library officials should have the technology at their fingertips to notify law enforcement of any emergency at their facility. This is a great initiative for the County that shows we are moving forward in efforts to protect our communities.”
“The RAVE application will assist the Nassau County Police in the event of an incident which requires emergency response by its police officers and medics,” said Nassau County Commissioner of Police Ryder. “When a school or library can immediately contact the police, it can decrease our response time which will be of great benefit when seconds are crucial.”
The RAVE system is technology that has recently been implemented in many Nassau County school districts. Under the leadership of Police Commissioner Patrick Ryder, the county has been proactive in securing new districts for use of the RAVE system as well as creating a new active shooter policing strategy.
Upon activation via a RAVE “panic button” the PD can respond but also see the events within a location to determine the safest and fastest action to save lives.
“Our goal is to expedite communication and the ability to monitor an event to minimize casualties and effectively end the situation,” said County Executive Curran.
The cost is $450 per location.
“I am proud of the work our PD does to stay ahead of this issue and the amount of determination and focus the men and women of the department have in protecting our residents,” said County Executive Curran.