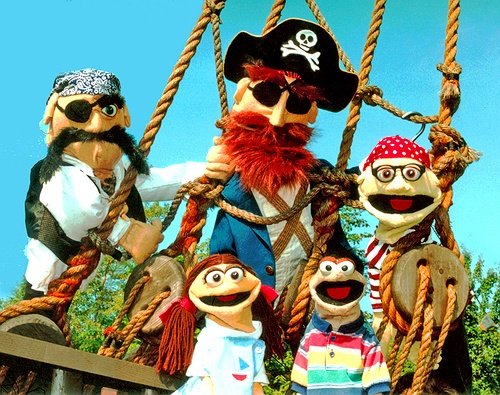 Sag Harbor, NY - August 3, 2015 - Bay Street Theater & Sag Harbor Center for the Arts is pleased to announce the new partnership between Bay Street Theater and Goat on a Boat. On August 20, the fun begins when Frogtown Mountain Puppeteer presents Everybody Loves Pirates.

“We’re very thrilled that Goat on a Boat is making its home at Bay Street. Liz Joyce is one of the most talented puppeteers in the country and we’re proud to be the home for one of only 50 remaining puppet houses in the United States today,” says Tracy Mitchell, Bay Street Theater’s Executive Director.

“Goat on a Boat Puppet Theatre has been the first taste of theater for the past 14 years for many East End families, and we look forward to many more years of children’s puppetry and theatre. We are grateful to Christ Episcopal Church for use of their parish house space which has housed our theater since its establishment in 2001. In that time, toddlers have crawled their way up into high school. We have helped generation experience a variety of some of the finest puppet shows, all performed on our intimate stage. We are looking forward to our evolution as we form our partnership with Bay Street Theater. Not only can we offer our programming to a larger, widespread audience, we can now host shows that are over 9 feet in stage height! In a sharing economy it is great when theaters that team up are the winners. We are proud to offer our unique programming with our new partners. We look forward to celebrating our 15th year and many more to come at our new home at Bay Street Theater,” says Liz Joyce, founder of Goat on a Boat.

Everybody Loves Pirates is the story is about eight-year-old Lucy and her goofy pal Little Chucky are searching for buried treasure, but a gang of bumbling pirates keeps getting in the way!  The kids get some help from their new ocean-dwelling friends, including enthusiastic superhero Lobster Boy, his reluctant sidekick Crabby, and an overgrown sea monkey. Everybody Loves Pirates features 15 hand-crafted mouth and rod puppets, and an 8 foot paper-mache pirate ship.

Frogtown Mountain Puppeteers is a puppetry troupe based in Bar Harbor, Maine, and is comprised of three siblings - brothers Erik and Brian Torbeck and sister Robin (Torbeck) Erlandsen.  Founded in 2000, Frogtown Mountain Puppeteers performs at festivals, schools, libraries and theatres in the United States and Canada. They write and create all the shows they perform and have received three Citations of Excellence from UNIMA-USA, the highest national award in puppetry.

Goat on a Boat Puppet Theatre is a non-profit puppet theater committed to introducing young children and their families to a lifelong love of theater and the creative arts since 2001. We are among only 50 established puppet theaters listed by the Puppeteers of America (the only national organization of puppeteers). Through puppet shows, puppet playgroups, family workshops, and special events, Goat on a Boat invites families in the community to be entertained and to become involved in their own cultural and creative education.