The Citizen Pool Survey takes place this time of year when ALBs are expected to become adults, emerge from the trees they are infesting and become active outside those trees. 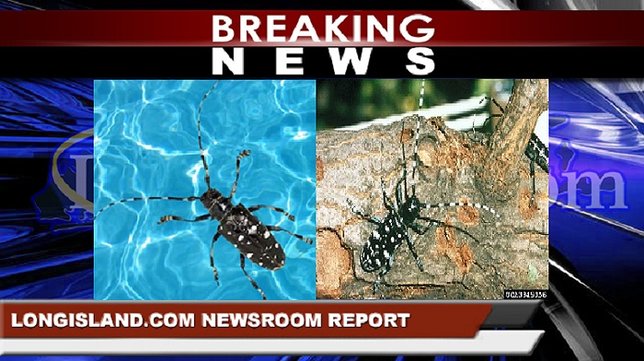 Finding new infestations early can help DEC and other state and federal agencies focus their efforts to eliminate infestations.

Albany, NY - July 26, 2016 - The Citizen Pool Survey takes place this time of year when Asian Longhorned Beetles (ALBs) are expected to become adults, emerge from the trees they are infesting and become active outside those trees. With citizens involved in looking for this pest, there is a better chance of finding new infestations early, which will help DEC and other state and federal agencies focus their efforts to eliminate infestations.

In addition to a owning a swimming pool, participants will need:

1. A digital camera
2. An email address that is actively used (if they want to receive updates from DEC)
3. The ability to upload a photograph and send it via email

You don't have a pool? You can still help. This year, DEC expanded its photo collection to include anyone who spots a suspect beetle, whether it is found in their pool or not. Residents are also encouraged to submit photos if there is suspicion of an Emerald Ash Borer (see what it looks like on DEC's Emerald Ash Borer web page) or another invasive pest damaging native ash trees. Photos can be submitted to the forest health program email address listed below.

Directions for participating in the pool survey are outlined below:

Step 1: From July 23 - August 30 (when adults are active), at least once a week, or when you clean your pool, check the debris collected in your filter and skimmers.

Step 2: Look for the ALB (See what it looks like on DEC's ALB web page). Contact the forest health program (see phone number and email address below) and we will provide a sheet to help identify insects collected.

Step 3: Take a picture of any insect you think might be an ALB.

Step 4: Once a week send a photo of the insect that looks most like ALB. (DEC would like to hear from you once a week.)

Step 5: Send the photo via email

Step 6: Freeze the insect in a plastic container until DEC staff respond (typically that will be about a week). Staff will either instruct you to discard the insect or give instructions on mailing it, delivering it, or arranging for pick-up.

About Asian Longhorned Beetle
On September 13, 1996, the Systematic Entomology Laboratory of the Agricultural Research Service confirmed a specimen sent to them for identification as A. glabripennis. This pest was collected on maple and horse chestnut trees by the New York City Parks and Recreation Department at Green Point in northern Brooklyn. It was initially identified by E. Richard Hoebeke of Cornell University. The Longhorned beetle is a pest found in China, Japan and Korea. This was the first detection of this pest in the United States.

The early stages of larvae of this beetle feed between the xylem and the phloem, and the later stages feed only on the xylem, inhibiting the tree's vascular system. It is most destructive when larvae cross perpendicular to the flow, thereby cutting off many vascular paths. Larvae can cut off the flow from vasular tissue and essentially girdle the tree. Adults emerge through three-quarter-inch holes in the bark. Recorded in the literature are the following hardwood hosts in Asia: Ulmus parvifolia (elm), Salix babylonica (willow), and Populus species (poplar). Hosts found in Brooklyn include Aesculus (horsechesnut) and Acer species (Norway, sugar and silver maples).

If you think you have an ALB, take a picture and email it to the DEC Forest Health office or call 1-866-640-0652. Keep the suspect beetle in a container in your freezer in case it is ALB. It will need to be sent to a lab for verification.