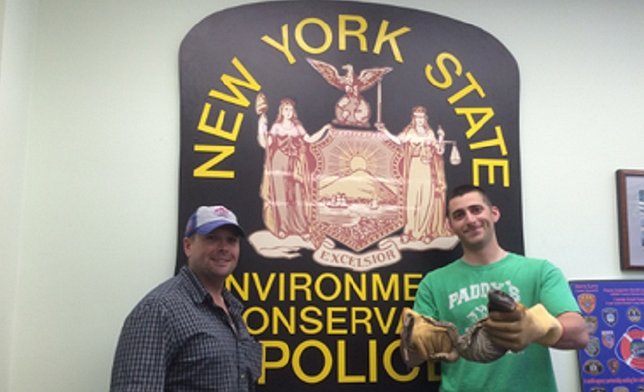 Stony Brook, NY - July 20, 2016 - ECO Ron Gross recently spotted a Black Throat Monitor and an American Alligator advertised for sale on Craigslist. Both species are illegal to own in New York, and the map on the ad showed the listing in an area in Queens. ECO Gross forwarded the information to Queens ECO John Gates. ECO Gates began texting the subject on an undercover phone and through his messaging was able to set up a time to purchase the Monitor for $350, although the Alligator had already been sold.

ECO Gates was told to meet in Stony Brook to pick up the animal, not Queens. ECOs Gates and Gross met with the seller at his house on June 30 in plain clothes and confirmed that the Monitor was there.

Once the seller brought the monitor out of the house, ECOs Mark Simmons, Marcia Goodrich and Lt. Tom Gadomski, who were waiting nearby, responded and took possession of the animal.

The seller was charged with Illegal Possession of a Black Throat Monitor Without a Permit. The owner allowed the ECOs to search the house and no other illegal animals were found. The Monitor was seized and turned over to the Suffolk County SPCA for rehoming.