Governor Cuomo today announced that $500,000 is now available to assist communities on Long Island with removing and replacing trees infested by the southern pine beetle. 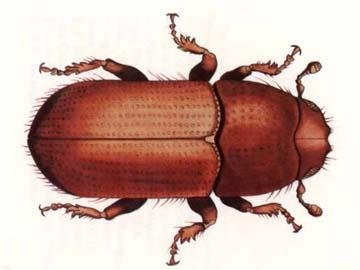 Photo by: U.S. Department of Agriculture, licensed under CC BY SA 2.0 Generic.

"New Yorkers have a strong connection to their environment which on Long Island is being threatened by an influx of invasive species, such as the southern pine beetle," Governor Cuomo said. "This funding will help in this administration's ongoing efforts to stop these infestations and help preserve Long Island's environmental treasures for future generations."

Southern pine beetles have killed thousands of pine trees on Long Island since it was first discovered in 2014. Through the Southern Pine Beetle Community Recovery Grant program, a total of $500,000 in grants are available to municipalities, municipal corporations, soil and water conservation districts, school districts and community colleges to remove infested or dead pine trees or to plant trees to replace those lost to southern pine beetle. Awards will range from $25,000 to $75,000, and have a local match requirement of 25 percent of the grant amount requested. Local match can be made by funding or in kind services. The grants are funded by the state's Environmental Protection Fund.

The Department of Environmental Conservation Commissioner Basil Seggos said, “The Department of Environmental Conservation is committed to helping communities impacted by southern pine beetle remove trees to maintain public safety and replant in areas where trees have been killed. New York is making significant investments in the fight to addresses their spread. These grants will help safeguard the Central Pine Barrens, which is vital for protecting water quality, wildlife habitat, endangered species, and recreational opportunities.”

Applicants should detail the scope of work and how the project will provide environmental, economic, and/or social benefits in the community. Applicants are encouraged to form regional partnerships and project consideration should be given to underserved neighborhoods. The Department of Environmental Conservation foresters are available to provide applicants with technical assistance.

Applications are required to be developed and submitted through the New York State Grants Gateway by 2:00 p.m. on August 31, 2016. For more information, call The Department of Environmental Conservation at (518) 402-9425. More information is available here.

Senator Tom O'Mara, Chairman of the Senate Environmental Conservation Committee said, "Combating invasive species remains one of New York State's most critical agricultural, economic and environmental challenges. The uncontrolled spread of invasive species can devastate regional economies and environments, and cost local communities hundreds of millions of dollars and thousands of jobs. We appreciate Governor Cuomo's recognition of these risks, and I look forward to continue working with the Cuomo administration and local leaders throughout New York to prevent and eradicate these threats."

Senator Ken LaValle said, "It's critically important that we provide resources to fight the devastating effects of the southern pine beetle on Long Island. The Governor recognizes that we need to commit the support necessary to control this problem before it becomes unmanageable. These grants are a step in the right direction."

Assemblyman Steve Englebright, Chair of the Assembly Committee on Environmental Conservation, "The discovery of the southern pine beetle poses a very real and significant threat to the Pine Barrens, especially considering trees previously thought too small to be attacked have been infested. These community grants are a good first step in helping to protect the Long Island Pine Barrens, which represent the largest contiguous block of forest left on Long Island. The Pine Barrens help to filter our drinking water, as well as provide a home to thousands of plant and animals species, many of which are endangered or threatened. In recognition of the importance of invasive species eradication efforts, this year’s budget nearly doubled funding to fight invasive species, including the southern pine beetle. I worked with Governor Cuomo to secure the funds and to direct a greater share to eradication efforts. Additionally, the budget for the first time explicitly authorizes combating invasive species on State lands. I look forward to continuing to work with Governor Cuomo to ensure that southern pine beetle eradication efforts receive the financial resources they need."

Richard Amper, Executive Director, Long Island Pine Barrens Society said, “In combination with the commitment we’ve received to fight southern pine beetle in the Pine Barrens, this is a terrific and comprehensive approach to the beetle battle.”

DEC's Fight against Southern Pine Beetle
Since its discovery, The Department of Environmental Conservation has used traps, aerial surveys, and ground surveys to track the southern pine beetle. In May, The Department of Environmental Conservation worked with the New York State Office of Parks, Recreation and Historic Preservation, Parks and Trails NY, and volunteers to replant more than 600 pine trees along impacted trails at Connetquot River State Park. Additionally, the Department has cut down more than 8,500 infested and buffer trees to lower the populations of the beetle and slow its spread.

Mapping Infestations Using Aerial and Ground Surveys
Aerial surveys were conducted in May and June over the Central Pine Barrens, with another flight planned for August. These surveys map and locate infested trees in the area.

Summer Southern Pine Beetle Suppression Plan
More than 500 infested and buffer trees in verified infested areas have been cut since early June 2016 to lower the population of southern pine beetle.

The Department of Environmental Conservation staff will review the completed grant applications and select award recipients based on established evaluation criteria, including cost-effectiveness, projected benefits, use of recommended standards in implementation, community outreach, education, support, and regional economic impact.