Suffolk County Community College has been producing live-to-web television productions for approximately eight years, but this year the college's productions received an upgrade. 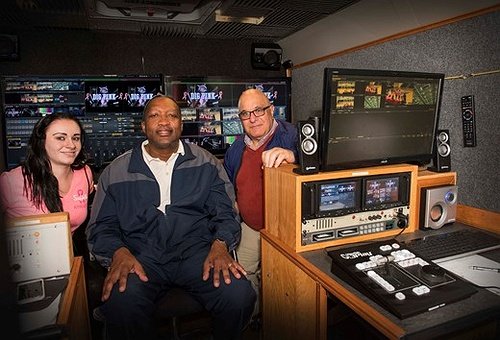 "'We've been working on the vehicle for more than a year." said Bernstein who added the vehicle has twice as much space.

"The new vehicle," Bernstein said, "can handle more equipment, allows students to stand and is spacious enough for several students and an instructor. It's a unique piece of teaching equipment unlike anything on any SUNY campus," Bernstein added.

"Professor Bernstein and his students are now working in an environment identical to what would be encountered in a real-world live television production," said Suffolk County Community College President Dr. Shaun L. McKay.

Bernstein said his students produce up to four live web broadcasts each semester including concerts, athletics and graduation.  Bernstein said each broadcast requires up to month of preparation.

"We set a high standard - a high bar," Bernstein said, " and I find it most rewarding when I'm out working in the industry and work with former students. It's a thrill."

And thrilled, Bernstein should be. His program has produced distinguished alumni, including: