New innovative drug treatment plan widely proven to reduce the cravings for heroin and other Opiates, block users from “getting high” and prevent relapse. 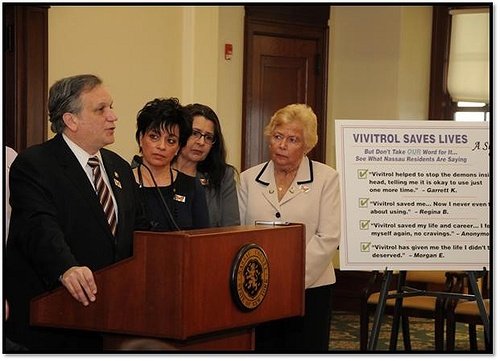 Nassau County, NY - February 26, 2015 - Medical Center (NUMC), today launched a new, innovative drug treatment program that has been widely proven to reduce the cravings for heroin and other Opiates, block users from “getting high” and prevent relapse.

“A Shot at Life” - Nassau’s new Pathway to Recovery program, provides counseling with monthly injections of the non-narcotic medication Vivitrol, which caps the Opiate receptors in the brain, blocking the drug’s euphoric effects. Unlike other “daily dose” medications long-used to treat Opiate and heroin addiction, Vivitrol cannot be abused, is non-addictive and has had great success with several local doctors, and in at least 20 other states. At no cost to County taxpayers, Nassau’s drug treatment program may be expanded after its initial trial.

“My administration has combated heroin and opioid abuse through a comprehensive strategy that includes enhanced enforcement, education and awareness,” said County Executive Mangano. “Nassau County is now offering those battling addiction 'A Shot at Life' and freedom from narcotics. Vivitrol must be paired with counseling to achieve the very best rate of total drug free independence and recovery. It offers the brain time to heal and has the potential to save lives while decreasing recidivism and incarceration.”

“We are pleased to partner with County Executive Mangano and County officials in their launch of a Vivitrol program to combat the heroin and opioid epidemic. Combined with counseling and education, those battling with addiction will have a better chance of recovery, thanks to Vivitrol and the program, ‘A Shot at Life’,” said Victor F. Politi, MD, FACP, FACEP, NuHeath/NUMC President/CEO.

This month, County Executive Mangano secured $328,000 in State funding from Governor Cuomo for several outpatient detoxification centers in the County, to help those addicted enroll in the Vivitrol program. To be eligible for Vivitrol, individuals must be detoxified and Opioid-free for 7-10 days. Nassau County’s Opioid Treatment Program has begun receiving referrals from NUMC’s rehabilitation program, which screens Opiate-addicted individuals for eligibility in the Pathway to Recovery program trial. In addition to Vivitrol, these individuals will receive treatment/recovery planning and review, individual counseling, group counseling, case coordination and toxicology testing. The Pathway to Recovery program requires medical insurance; Medicare, including Part D; and Medicaid, including Medicaid Managed Care; or private pay. Vivitrol manufacturer Alkermes, Inc. offers up to $500 to cover an individual’s co-pay or toward the cost of the monthly shot for those without insurance or who are Medicaid-pending. There is no income limit to be eligible for the discount program.

Since taking office in 2010, the Mangano administration has battled prescription drug abuse and the heroin epidemic, by providing drug abuse prevention initiatives in schools and training more than 3,500 ordinary citizens on how to recognize an Opioid overdose and reverse its affects by administering Narcan, to give people a second chance at recovery.

In October 2014, County Executive Mangano, in conjunction with the Long Island Crisis Center, launched a new 24 hour a day, seven day a week Mental Health Substance Abuse information and referral Helpline, (516) 227-TALK. This Helpline provides additional information for enrolling in the Pathway to Recovery program. All calls are confidential.