The Office of the Attorney General (OAG) reached this milestone at a buyback at the Huntington Manor Fire Department, the latest law enforcement collaboration among OAG, Suffolk County Executive Steven Bellone, and the Suffolk County ... 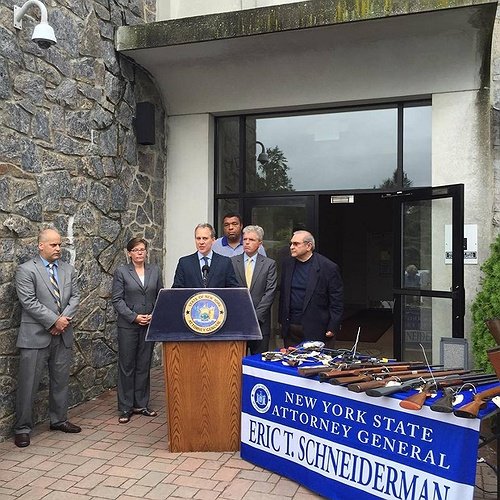 Huntington, NY - July 18, 2015 - Attorney General Eric T. Schneiderman today announced that more than 1,000 firearms have been turned in to law enforcement through his statewide gun buyback program. The Office of the Attorney General (OAG) reached this milestone at a buyback at the Huntington Manor Fire Department, the latest law enforcement collaboration among OAG, Suffolk County Executive Steven Bellone, and the Suffolk County Police Department.

“In addition to enforcing our state’s gun laws, my office is working to encourage gun owners to turn in unwanted weapons that might be stolen by a criminal or used in a deadly accident,” said Attorney General Schneiderman. “Thanks to our statewide gun buyback program, there are now more than 1,000 fewer firearms that could fall into the wrong hands. I’m committed to ensuring that New Yorkers feel safe in their homes and on the streets of their communities.”

“Initiatives like this provide residents an opportunity to dispose of unwanted weapons anonymously, helping to reduce the possibility of such weapons being used in situations of domestic violence, accidental discharge or injury to children and young adults playing with weapons,” said County Executive Steve Bellone. “I thank Attorney General Schneiderman for hosting this gun buyback initiative in Suffolk County.

“I fully support Attorney General Schneiderman’s gun buyback program and thank him for bringing this program to Suffolk County,” said Suffolk County Police Commissioner Edward Webber. “This important program is greatly appreciated by law enforcement. It a critical step in making our communities, neighborhoods, and police officers safer by taking guns off the street.

Under the program, both working and non-working firearms are accepted. There is no limit on the number of firearms an individual can return, but licensed gun dealers and active or retired law enforcement officers are not eligible to participate.

At the events, OAG offers free gun locks and money in the form of debit cards when a gun is received by law enforcement officers. OAG provides the following compensation by debit card for firearms returned on site:

Debit cards with the appropriate amount are issued after each unloaded gun is received and screened by the officers on site.

The buyback program, including the debit cards provided to New Yorkers who turn in firearms, is funded entirely through criminal forfeiture funds, which are seized from drug and gun traffickers by the OAG Organized Crime Task Force (OCTF).

“All levels of government agree that one way to make our residents safer is to take guns off the streets,” said Huntington Town Supervisor Frank Petrone. “The Town is pleased to have participated with our colleagues in state and county government to sponsor this program and thank everybody who participated in helping to keep guns from getting into the wrong hands.”

“Getting guns off the streets is a critical element in our ongoing efforts to prevent violence in our local community,” said Suffolk County Legislator Lou D’Amaro. “I thank Attorney General Schneiderman for sponsoring this gun buyback event and I am hopeful that the day will be a success.”

“I stand with the community, ready and willing to work together to do what it takes to make our neighborhood safer,” said Suffolk County Legislator William R. Spencer, M.D. “Getting guns off the streets and out of the hands of criminals has to be a part of those efforts. Many thanks to Attorney General Schneiderman, who has brought resources to Huntington Station for this gun buyback, and to all of our partners in the community for making this happen.”

Since 2011, OCTF has seized 274 firearms from gun traffickers. During the same time period, OCTF has also busted 24 large narcotics trafficking gangs in more than 560 felony narcotics arrests, and seized from them more than $1.5 million, 80 guns, and more than 2,000 pounds of illegal drugs.

In January 2014, Attorney General Schneiderman announced the “Model Gun Show Procedures,” a series of safety procedures for gun show operators in New York State. These rules seek to address the safety flaws identified in a 2011 OAG investigation that uncovered the private sale of firearms without background checks at New York gun shows. Dozens of gun show operators in have since adopted these policies, ensuring that virtually every firearm sold at a gun show in New York is accompanied by a background check.