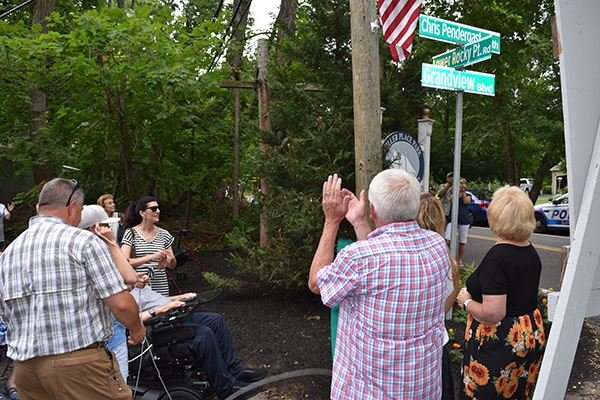 Street sign for “Chris Pendergast Path” after the unveiling. Photo: Town of Brookhaven.

Chris Pendergast embodied true grit. Diagnosed with amyotrophic lateral sclerosis (ALS) aka Lou Gehrig’s Disease in 1994, Pendergast’s prospects were grim. Most people with ALS die within a few years of diagnosis as the disease robs them of their ability to move, talk, and breath.

But, for 27 years Pendergast lived on, making it his life’s mission to fight ALS both personally and on the public stage. He ultimately raised over $10MM for ALS research and launched the epic Ride for Life, where he would drive his motorized wheelchair from Yankee Stadium to Washington DC, bringing awareness to the disease. Later on, he would ride from the Bronx to the East End of Long Island.

Yankee ballplayer, Lou Gehrig - known as the Iron Horse for his record of 2,130 consecutive games played - retired from baseball after being diagnosed with ALS. Gehrig gave his famous “luckiest man” speech at Yankee Stadium in 1939. He died from ALS two years later.

Pendergast died on October 14, 2020 of complications from his ALS. 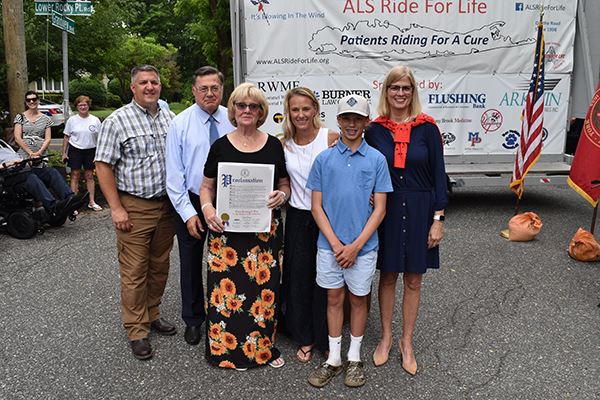 This June, the Town of Brookhaven dedicated Grandview Boulevard in Miller Place in honor of former resident Chris Pendergast. A ceremony, held on  June 21, Global ALS Awareness Day, was attended by over 100 people, including Mr. Pendergast’s family, friends, neighbors, Brookhaven Town and Suffolk County officials where a street sign for “Chris Pendergast Path” was unveiled.

Ride for Life and Pendergast himself worked closely with The ALS Association Greater New York Chapter to raise awareness and funds for research as well as care for patients diagnosed with the disease through the ALS Certified Center at Stony Brook Hospital.

With the street dedication, Pendergast’s legacy will continue to live on in the town where he lived.