Friends of the IDF (FIDF) Brings Israelis to Ride With U.S. Vets, As Emergency Campaign Continues. 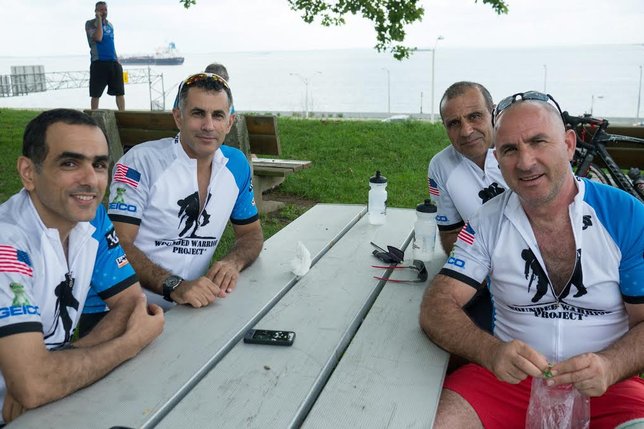 New York, NY - July 25, 2014 - Four former Israel Defense Forces (IDF) soldiers, who were wounded during their military service, competed in the Wounded Warrior Project (WWP) Soldier Ride alongside wounded U.S. veterans in Manhattan and Long Island this past weekend. The Israelis included David Peretz, Itzik Gabai, Vlad Tokarev, and Itamar Gat.
The Israeli veterans came to New York thanks to Friends of the IDF (FIDF), which teamed up with WWP for this event. Some of the IDF participants are part of the FIDF Strides program, which helps wounded IDF veterans rediscover their strength by providing special prosthetics for athletic activities. Strides helps wounded veterans partake in running, biking, and other challenging activities. More information about the Strides Program can be found here.
The ride, uniting wounded Israeli and U.S. veterans, took place as Israel’s Operation Protective Edge in Gaza remains in full force. FIDF has launched an emergency national campaign, “FIDF Frontline Operation,” to help provide for the wellbeing of Israeli soldiers. The IDF has issued a list of thousands of essential items for active duty and reserve IDF soldiers on the frontlines, and FIDF is mobilizing to meet these needs. To make a donation and support the brave men and women of the IDF, please click here.
“The State of Israel cannot exist without a strong army, and it was a great honor to defend my homeland,” said former IDF soldier Vlad Tokarev. “I would like to thank Friends of the IDF for the help they give to IDF soldiers, to the Lone Soldiers, and to the wounded veterans. Your help and care makes us stronger and enables us to live a full life.”
Every year, WWP conducts an adaptive cycling event in order to provide a cycling experience for wounded servicemen and women and to spread awareness for the Wounded Warrior Project and its many programs.
This year, the WWP rides took place in Manhattan on July 17, and in Babylon and the Hamptons on July 19.
About Friends of the Israel Defense Forces (FIDF):
FIDF was established in 1981 by a group of Holocaust survivors as a 501(C)(3) not-for-profit organization with the mission of providing and supporting educational, social, cultural, and recreational programs and facilities for the heroic men and women of the IDF. Today, FIDF has more than 120,000 loyal supporters, and 15 regional offices throughout the U.S. and Panama. FIDF proudly offers its support to the IDF soldiers and their families through a variety of unique and innovative programs. These opportunities reinforce the vital bond between the communities in the United States, the soldiers of the IDF, and the State of Israel. For more information, please visit: fidf.org.
Photo credit: FIDF
Photo #1: Vladimir Tokarev at the WWP Soldier Ride
Photo #2 (left to right): Itamar Gat, Ariel Gat, Itzhak Gabbay, David Peretz
Photo #3: Ariel Gat, David Peretz, Itamar Gat