A new Nassau SPCA program offers free pet protection to victims of domestic violence who have fled to The Safe Center LI. 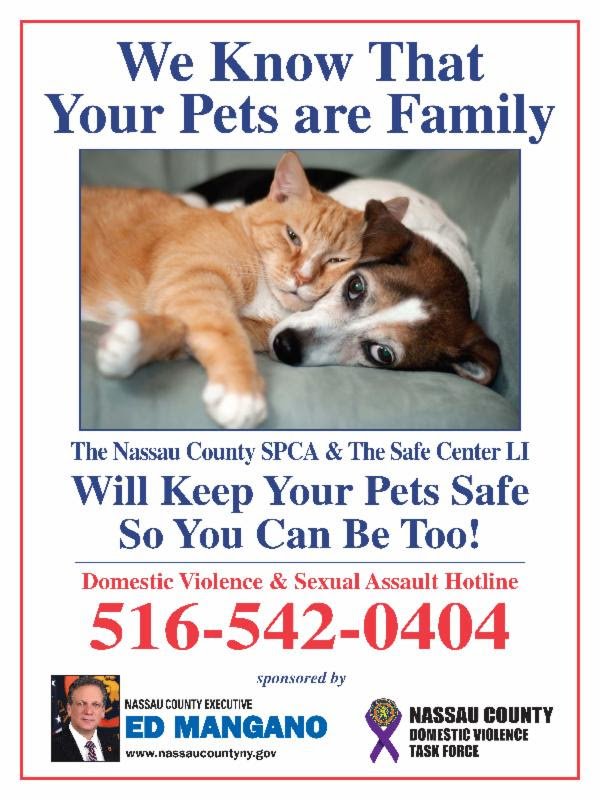 Mineola, NY - July 11, 2014 - Nassau County Executive Edward P. Mangano today announced a new Nassau SPCA program that offers free pet protection to victims of domestic violence who have fled to The Safe Center L.I.
County Executive Mangano was joined by New York State Assemblyman Dave McDonough; Dr. John Imhof, Commissioner of the Nassau County Department of Social Services and Chairman of the County's Task Force on Family Violence; Bob Sowers, President of the Nassau County Society for the Prevention of Cruelty to Animals; Sandy Oliva and Cynthia Scott, Executive Directors of The Safe Center LI; and Gary Rogers, Nassau County's Animal Emergency Coordinator and SPCA member; and Leigh Buchman, Safe Center Crisis Center Coordinator.
"Domestic violence victims are often reluctant to seek shelter because they don't want to leave their pets behind in an unsafe environment," said County Executive Mangano. "The SPCA and The Safe Center are partnering to help victims by assuring them that their pets will be well-cared for by the SPCA at no cost to the victim or taxpayers."
According to the National Coalition Against Domestic Violence:
Domestic violence victims can call The Safe Center Hotline at (516) 542-0404 for assistance regarding safety planning and shelter.  The Nassau County SPCA will visit The Safe Center L.I. to pick up the pet(s) and bring them to a private facility for housing and veterinarian care.
About Nassau County SPCA
Located in Nassau County, New York, The Nassau County Society for the Prevention of Cruelty to Animals is a 501(c) (3), nonprofit organization originally designed to protect animals in the county from abuse and neglect, and to provide basic welfare. We hold special authority to enforce NYS Agriculture & Markets Law, and all other state and local humane laws. We are the only animal protection agency officially designated to operate within the county's borders.
The NCSPCA is a volunteer organization dedicated to the rescue, care and placement of needy animals. The Society is run entirely by unpaid volunteers and its operations have been historically funded through contributions solicited from the public and through corporate grants.
The NCSPCA receives no public funding, is in no way affiliated with, a subdivision of or funded by any other local, state or national organization and every contribution, large or small, helps to provide the critical care needed to help homeless, abused and neglected animals in Nassau County. The continued success of each program relies entirely on donations. No money given to any other spca organization aids or benefits the NCSPCA. Your generous contribution will help the NCSPCA in all of its efforts.