Donna Jannine Schultz claims in a lawsuit she was unjustly terminated from her position after reporting alleged misconduct by Justin Meyers, Suffolk DA Sini’s Chief of Staff; Sini calls the claims “frivolous.” 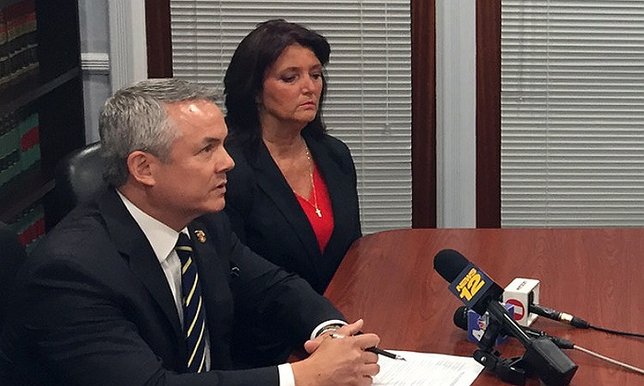 Donna Jannine Schultz with her attorney, Brendan Chao, at a recent press conference announcing the notice of claim against Suffolk County.

Suffolk County, NY – June 29, 2018 – A notice of claim has been brought against Suffolk County, the Suffolk County Executive's office, and in particular the Suffolk County District Attorney's Chief of Staff Justin Meyers, alleging that Meyers has a history of abusing county employees.
The claim – the first step to a federal lawsuit – was issued by Rockville Centre-based attorney Brendan Chao, who is representing Donna Jannine Schultz, former Director of Communications for the Suffolk County Police Department. Schultz claims she was abused and threatened by Meyers for an extended period of time and, after reporting the abuse, was terminated from her position where she had worked for nearly two years. Schultz was terminated this past March for what she claims are completely fabricated and retaliatory reasons and is suing for her job back, in addition to back pay.
“I'm not in the business of taking on losing cases...I've been doing this for 20 some-odd years now, and I'd like to think I can spot a case that has merit and that's worth pursuing,” Brendan Chao, Schultz's attorney, said. “I think they have a lot of explaining to do, and I'd like to think there are going to be a lot of holes poked in their stories, and at the end of it Donna will be vindicated.”
Suffolk County District Attorney Timothy Sini has issued a statement to the media, dismissing Schultz’s allegations by saying, "The Notice of Claim is frivolous and replete with untrue assertions, which will be made clear if and when any lawsuit is filed.”
Schultz said that she had previously reported to Meyers while he was the SCPD’s Assistant Commissioner for Strategic Communications, and alleges that he was abusive – both in written and spoken word – during nearly her entire tenure under him. Meyers later moved to Suffolk County DA Tim Sini’s office as his Chief of Staff, but according to Schultz, Meyers’ alleged abuse – both to her and other employees – nonetheless continued, despite the fact that she no longer directly answered to him.
“The abuse began within the first few months of my tenure. It was consistent, especially when he did not like what he was told, or if someone disagreed with him,” she said. “Justin would joke he was an ‘equal opportunity d*ck.’ He'd yell in person or by phone, email or text whomever he was directing his anger at. This included other SCPD employees, members of the Suffolk County Executive's communications team, and even members of the media.”
Other abuses on the part of Meyers, Schultz claims, included having county workers do personal errands for him and campaigning for Sini while on county time.
Schultz noted that there were a number of times over the course of 21 months that she met with Meyer to confidentially discuss his behavior towards her and other members of the county's staff, but that little came out of the discussions.
“He typically would acknowledge the inappropriate behavior but would shrug it off to being stressed out,” she said. “And at one point in time, he even stated that if people didn't like the way he did things, they can quit.”
Schultz said that the abuse culminated during an incident that occurred on Feb 22, 2018. At that time, Meyers - who was now working at DA Sini's office - sent Schultz the following text messages while she said she was attending a wake: 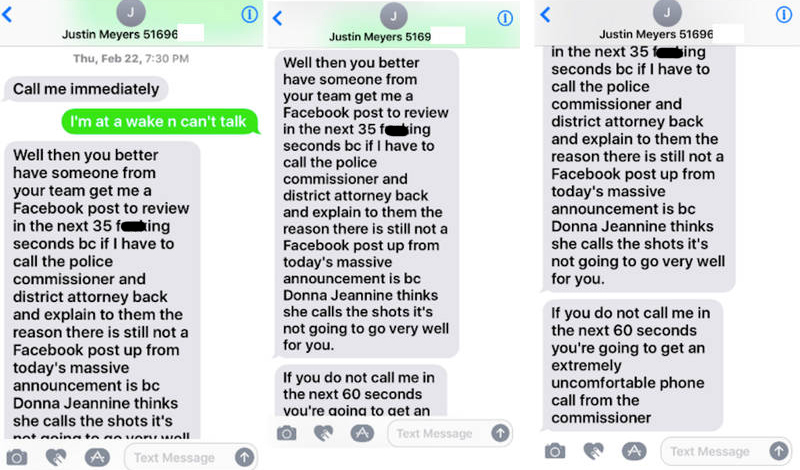 Photo Credit: Donna Jannine Schultz
The following week, during a meeting she requested with her supervisors, she discussed issues pertaining to Meyers' behavior, including the alleged abuse and misuse of county employees. Then, on March 15, Schultz met with Deputy County Executive Dennis Cohen and Lisa Black, Suffolk County Executive Steve Bellone's Chief of Staff; it was at this time that Schultz was asked to resign from her position as SCPD Director of Communications due to failing a background check pertaining to a misdemeanor conviction from a decade prior, as well as unauthorized personal use of a SCPD computer. When she refused to resign she was then fired later that day, according to Schultz’s attorney, Brendan Chao.
“Donna had a previous misdemeanor conviction for receiving unemployment benefits when she shouldn't have...she did something she shouldn't have done, and she paid full restitution. She told everyone in the chain of command at this job about it when she started, and for 21 months she was assured that it was no problem. The two weeks after she disclosed Meyers’ misconduct, she's called in and told that she failed the background check,” he said. “As for the computer use, there was one instance where her daughter was being stalked by a young man who had a warrant out for his arrest, and she used a police computer to look him up to find out if he had been arrested. She self-reported this use, and that was it. I believe they just used all of this stuff for an excuse to get rid of her...first they asked her to resign, and when she refused they fired her.”
While no other Suffolk County employees have publically come out in support of Schultz’s claims, Chao said that he will pursue whatever legal avenues are available to him in order to prove his client’s case and clear her name.
“There certainly will be other witnesses who will be subpoenaed and who will undergo deposition, including senior police officers,” he said. “We're hopeful that they take their oaths seriously and testify accurately and honestly, but there are a number of people who can testify to Meyers’ behavior.”
Schultz said that she isn’t looking to be a crusader or a warrior for social justice; she just wants her job back as the SCPD's Director of Communications, a position she said Meyers himself recruited her to fill in 2016.
“For 21 months, I dedicated virtually every waking moment to fulfilling and growing the position,” she said. “Suffolk County has strong guidelines and penalties regarding workplace violence and harassment, and I’m hopeful Suffolk County Executive Steve Bellone and Suffolk County District Attorney Tim Sini will hold Justin Meyers accountable for his completely unprofessional and threatening actions. The incidents between Justin and I are not unique. I am sure more employees will come forward.”