A man keyed another individual's car following an argument outside a Walmart. 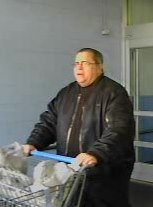 Centerach, NY - April 24, 2014 - Suffolk County Crime Stoppers and Suffolk County Police Sixth Precinct Crime Section officers are seeking the public’s help to identify the man who keyed a vehicle in Centereach.
Following a verbal altercation between two men in the parking lot of Walmart, located at 161 Centereach Mall,  one man keyed the other man’s vehicle, a 2010 Nissan Frontier, on April 19 at approximately 4:45 p.m.
The suspect, who was described as white, in his late 40s to early 50s, approximately 5 feet 7 inches tall and heavy set, fled the scene in a gray or silver SUV.
Suffolk County Crime Stoppers offers a cash reward of up to $5,000 for information that leads to an arrest. Anyone with information about this crime is asked to call anonymously to Crime Stoppers at 1-800-220-TIPS. All calls will be kept confidential.