Browning: "It was an honor to recognize both Travis and Chris for obtaining the highest rank of scouting." 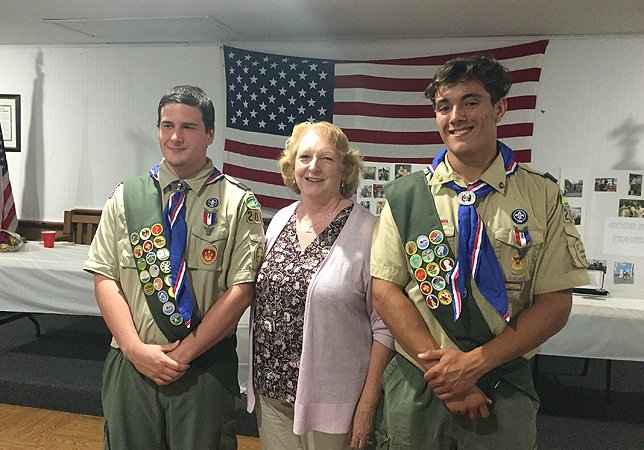 Mastic Beach, NY - June 28, 2017 - Boy Scout Troop 2010 came together on June 26, 2017 at American Legion Post 1533 in Mastic Beach to honor Travis Duecker and Matthew Gentile for achieving the rank of Eagle Scout. Legislator Kate Browning (WF-Shirley) attended the ceremony and presented the new Eagle Scouts with proclamations to recognize their prestigious accomplishment.
Eagle Scout is the highest rank a Boy Scout can attain, and it requires earning at least 21 merit badges and demonstrating Scout spirit through the Boy Scout Oath and law, service, and leadership. This includes an extensive service project that the Scout plans, organizes, leads, and manages.
Travis Duecker’s Eagle Scout project consisted of building two benches for the Knights of Columbus which will be placed in a garden on the grounds of the building. This project will benefit the Knights of Columbus organization for many years to come.
Matthew Gentile’s Eagle Scout project consisted of making a 6’ by 3’ flag made out of Cedar wood for the American Legion, which is on the display in the new horseshoe pit on the grounds of the building. This project will benefit the American Legion organization for many years to come.
“It was an honor to recognize both Travis and Chris for obtaining the highest rank of scouting,” said Legislator Browning. “These young men have achieved critical goal, and I know it will benefit them throughout their lives. They are a great example for their peers, and will be strong future leaders.”