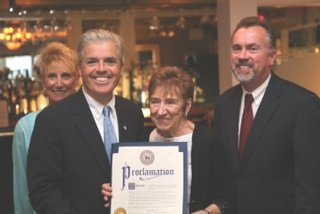 Since 1968, Ms. Torraville was employed as a crossing guard with the Department and was assigned to the 4th Precinct in Hauppauge.   For twenty three years, she served as an AME Shop Steward. Her tenure is one of the longest in AME history.  While serving as a guard, Torraville, who lives in Commack, also held a part time position in the food service industry.

On June 10, 2014, special recognition was given to Ms. Torraville in honor of her retirement by the 4th Pct. Crossing Guards at their annual “End of the School Year” event held at Villa Sorrento in St. James. County Executive Steve Bellone, who attended the gathering, presented Ms. Torraville with a special proclamation from his office.  The County Executive recognized Torraville for her tenure with the Suffolk County Police Department and cited her unparalleled devotion to the safety and well being of thousands of children.

“It was a joy getting to know all the wonderful children over the years, some of whom are grandparents now,” said Ms. Torraville. “Retiring is bittersweet, but I am looking forward to pursuing new opportunities where I can volunteer my time.”

Marie Torraville, the unstoppable octogenarian, will enjoy some well-earned downtime this summer, and plans to seek volunteer work in the Fall.