The Suffolk County SCPA & Town of Islip held joint a Press Conference today about "Miracle", the dog that was rescued from a dumpster on Christmas Eve. 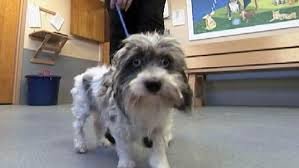 Bay Shore, NY - January 15th, 2014 - The Suffolk County SPCA and the Town of Islip held a joint Press Conference today, Wednesday January 15, 2014 at 11:00 am at the Town of Islip Animal Shelter in Bay Shore.  The guest of honor was "Miracle", the dog that was rescued from a commercial garbage dumpster on Christmas Eve.
Islip Town Councilman Anthony Senft, Jr. and Suffolk County SPCA officials today announced that applications for the adoption of “Miracle,” the 3-year-old dog rescued from a trash bin at a West Islip gas station on Christmas Eve, will be accepted at the Islip Animal Shelter and Adopt-a-Pet Center, beginning January 16. Additionally, NYS Senator Phil Boyle announced his sponsorship of a bill that seeks to modernize the definition of animal cruelty crimes in New York by promoting sound enforcement and consistent interpretation of current animal laws.
“Miracles’s story touched the lives of many – locally, nationally and even internationally,” said Islip Town Councilman Anthony Senft, Jr. “The outcry from the public has been overwhelming. But thanks to the efforts of all involved, especially our Animal Shelter staff and volunteers, and the SPCA, Miracle’s story has a happy ending. A thorough adoption process which will be conducted jointly by a Town Shelter and SPCA committee, will ensure that Miracle gets the forever home that she so rightfully deserves. Her story is truly a Miracle.”
Miracle's adoption process to find a forever home was outlined as were general aspects of the criminal case.  Also, the search for Baily was discussed.
Senator Phil Boyle  discussed the progress of new animal cruelty legislation which will streamline some of the existing antiquated laws. The Suffolk County SPCA supports this information legislation.
For More Information, Please Contact:
Suffolk County SPCA
631-382-SPCA (7722)
www.suffolkspca.org