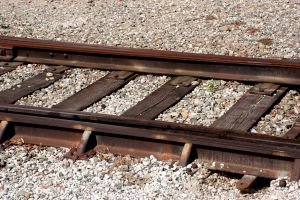 Long Beach, NY - April 14, 2014 - The Metropolitan Transportation Authority and the Long Island Rail Road today announced the start of a $120 million construction program designed to protect the LIRR’s Long Beach Branch from the kind of devastating damage caused by Superstorm Sandy in 2012. To better fortify the branch, construction is starting on a four-year project to build three new power stations, replace switch machines, signals and communications systems as well as third rail equipment and, lastly, harden the electrical system that powers the Wreck Lead Bridge, which spans Reynolds Channel and connects Island Park to the City of Long Beach.

Clearing Vegetation on LIRR Property
By necessity, the project will include an extensive clearing of trees and bushes on LIRR property to make way for a new pole line that will anchor new signal, communications and electrical systems and allow their placement well above the flood plain. The vegetation cutting, which is scheduled to begin Monday, April 14, will be done by private contractors under the supervision of a New York State licensed arborist and LIRR personnel. The extent of the cutting in each area will follow a very precise plan based on requirements set out by project engineers with the goal of minimizing the impact on nearby communities.

MTA Chairman and CEO Thomas F. Prendergast said: “The LIRR is an economic lifeline for tens of thousands of residents on the South Shore of Nassau County who commute to and from work each day via the Long Beach Branch. It is no less important to the City of Long Beach, a destination for thousands more heading to the community’s beautiful public beachfront and its popular restaurants and nightlife. There is no better insurance for the economic vitality of this region than ensuring the safe and reliable future operation of the LIRR’s Long Beach Branch.” The MTA has added nine Long Island Rail Road Sandy restoration projects to its 2010-2014 Capital Programs, a total commitment of $265 million and the plans for Long Beach represent a major part of that effort.

LIRR President Helena E. Williams said: “We want to make sure that customers along the Long Beach Branch are fully aware of our work plan in the weeks and months ahead as we dedicate ourselves to making sure that we are fully prepared and protected when the next big storm reaches our shore. In the meantime, we will do our best to keep residents informed as work proceeds along the LIRR right-of-way in their neighborhoods. And we promise our customers that we will work hard to minimize any inconvenience caused by the project and keep them fully informed about any service related impact.”

The Devastation of Superstorm Sandy
When Sandy struck Long Island on October 29, 2012, the Long Beach branch was the most seriously affected of the Railroad’s 11 branches. Third rail power was lost with three of the four substations off-line and awash in sea water. The tracks between Island Park and Long Beach stations were covered with debris and all systems – switch, signal and communications – were knocked out by the salt water. Partial service was restored on November 14 with diesel trains operating between Lynbrook and Long Beach. Full electric service was restored 11 days later.

Even as emergency repairs were underway to bring train service back to Long Beach Branch after the storm, the LIRR was developing specific Sandy restoration projects, including the replacement of its Oceanside, Oil City and Long Beach electrical substations as well as switching, signal and communications systems along the entire five and one half miles route over which some 20,000 customers travel on an average weekday. In addition, the Railroad developed a plan to strengthen the resiliency of the Wreck Lead Bridge, which spans Reynolds Channel and connects LIRR service from Island Park to Long Beach.

The design work and construction will be carried out over the next four years and at times require brief service outages when bus service will be substituted for trains. Those interruptions will be scheduled during off peak hours and on weekends so as not to impact peak hour commuting and to minimize the inconvenience to LIRR customers.

Long Beach Branch Substation Replacement (Cost $56.5 Million)
Three substations, Oceanside, Oil City and Long Beach, are being demolished and replaced by state of art pre-fabricated substations constructed on platforms that will take them out of harm’s way in what is now considered a flood-prone area. Work has just recently gotten underway on the Oceanside substation. The Oil City project is set to begin in January and Long Beach in September 2015.

Long Beach Branch Systems Restoration (Cost $56.4 Million)
This project calls for the replacement of switch machines, signals, communications and third rail equipment and is currently in design stage. Again critical components like the new signal and communication huts will be placed on platforms to make them more resilient in future extreme weather events.

Vegetation Management Phase to Take Four Weeks
The LIRR says the vegetation management aspect of the project will take approximately four weeks to complete, weather permitting. The cutting will take place along the south side of the LIRR right of way starting around Horton Avenue in Lynbrook and move east. At Broadway near the Centre Avenue Station, the cutting will be done on both sides of the tracks through Centre Avenue near the East Rockaway Station. Cutting will then continue on the south side of the right of way through Oceanside and Island Park until the Wreck Lead Bridge. It is important that trees and bushes are cut back before the growing season gets started in earnest. Obstructions such as tree limbs and bushes are not only a safety hazard, but contribute to slip-slide conditions on rails when leaves fall and decompose leaving a residue on rails. Careful management of the cutting is designed to minimize the impact on neighboring communities.