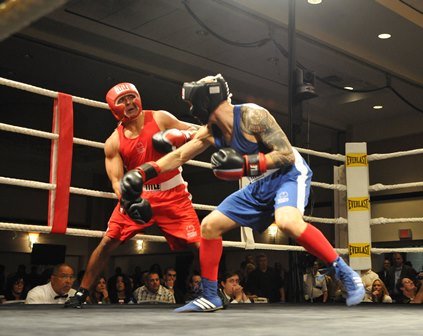 Smithtown, NY - June 18, 2015 - Long Island Fight for Charity will reveal the courageous men and women volunteer boxers who will enter training to prepare to box in the organization’s 12th Main Event this fall during the “2015 Boxer Announcement Reception” taking place Tuesday, June 23, 2015 from 6 to 8 p.m. at the Stonebridge Golf Links & Country Club, 2000 Raynors Way in Smithtown, NY. Fight for Charity sponsors, boxers, fans and supporters will gather to learn who will be in this year’s boxer lineup, enjoy food and beverages, and network during this upscale event.

This year’s popular and much anticipated Long Island Fight for Charity Main Event will take place in November 2015. It is expected to attract more than 1,200 people and raise more than $200,000 for local not-for-profit charitable organizations. Since its establishment in 2003, Fight for Charity has supported Long Island charities including Long Island Community Chest, The Genesis School and the National Foundation for Human Potential as well as more than 30 others. Close to $1 million in funds have been raised and used locally to directly assist individuals in need and support charities that serve individuals with special needs.

Volunteer boxers represent local business and all walks of life. The 2015 boxers, some of whom have participated in past Main Events, have obtained medical clearance and have made a commitment to train, attend organization events and raise funds for Long Island charities.

“Long Island is home to many caring and supportive individuals. Our volunteers boxers are a special breed, they choose to raise funds, train and get in the ring all to make the lives of others better.  Our announcement reception is the kickoff for a series of events which will lead up to the most exciting and anticipated evening of the year the Long Island Fight for Charity,” said Matt Silver, Fight for Charity Co-Founder.