A Coram mom was jogging along Canal Road in Mount Sinai on Sunday when she was struck by a vehicle that fled the scene, leaving her critically injured and in need of brain surgery. Police ... 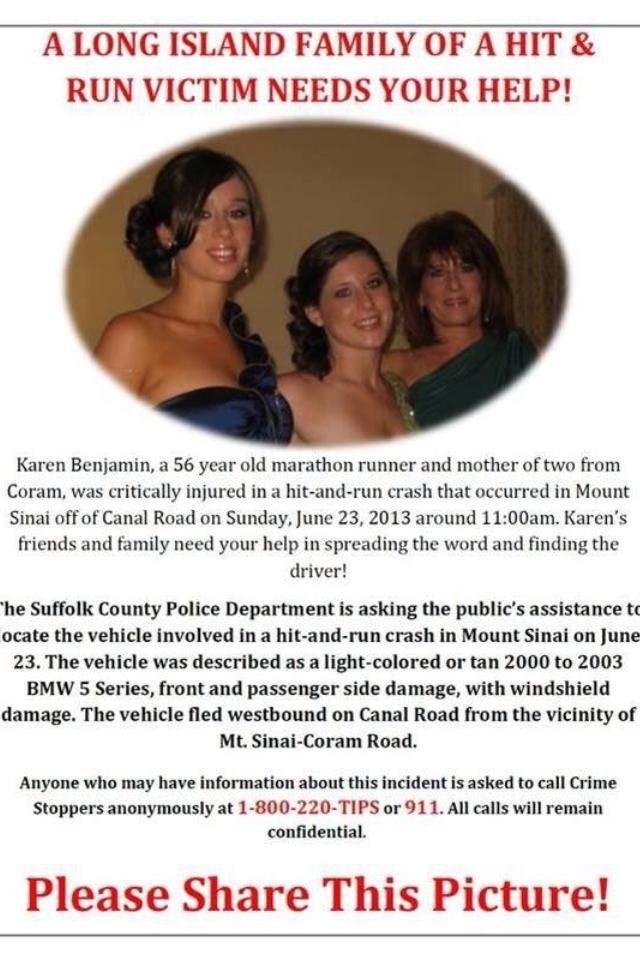 Karen Benjamin, 56, of Coram was jogging along Canal Road in Mount Sinai around 11 a.m. on Sunday when she was struck by a vehicle that fled the scene. Benjamin was left critically injured after being thrown into a guardrail near a section of the road that curved sharply.

Benjamin was unconscious as she was brought to Stony Brook University Hospital where she went through brain surgery.

In the immediate hours, police were unable to identify Benjamin’s identity since she was not carrying identification.

The section where the incident occurred was also closed off for hours as police investigated until the late-afternoon hours for information on the vehicle and driver involved in the incident.

Suffolk County Police Department detectives are seeking for help from anyone with information on the car or driver involved in the incident, which is described as a tan or light-colored midsize car.

It is a crime to flee the scene of an incident in New York State. Individuals can face a felony penalty and prison time of up to 15 years.

All calls to Crime Stoppers will be kept confidential at (800) 220-TIPS.