Suffolk County Executive Steve Bellone was joined by environmental, state, county and town officials Saturday to provide an update on the recent fish kills on the East End and ask the federal government for additional ... 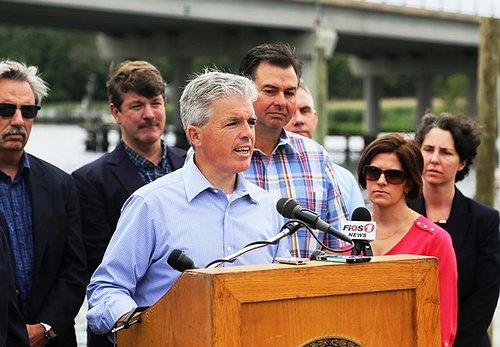 Suffolk County, NY - June 22, 2015 - Suffolk County Executive Steve Bellone was joined by environmental, state, county and town officials Saturday to provide an update on the recent fish kills on the East End and ask the federal government for additional assistance to help the region with its nitrogen pollution crisis after the second major fish kill in the Peconic Estuary, a federally designated estuary of national significance.

Hundreds of thousands of dead fish have recently washed up on the shores around Flanders Bay in the Peconic Estuary. Excess levels of nitrogen spewing from residential septic systems and cesspools as well as fertilizer use are believed to be a significant, contributing factor. The Peconic Estuary is one of 28 federally designated estuaries of national significance by the United States Environmental Protection Agency (EPA).

"We as a region, and as a nation, need to protect our federal estuaries, and we need wastewater infrastructure to do that," said Suffolk County Executive Steve Bellone. "Unfortunately, nothing can be done in the short term to stop this fish kill or an algal bloom from happening. But to reverse this trend we must continue to invest in and upgrade our wastewater treatment infrastructure.  To do that, we need additional assistance from our leaders at every level of government to help us combat this problem."

County Executive Bellone indicated a report citing the specific causes of the fish kills from the New York State Department of Environmental Conservation (DEC) and Suffolk County Department of Health is expected to be released within weeks.

The New York State Department of Environmental Conservation (DEC) continues to be the lead agency on the fish kills.  However, the Suffolk County Department of Health has been performing and testing water samples at county beaches and facilities to ensure the bathing and waterways are safe for recreational use.  The County advises residents and visitors to adhere to all posted signs at facilities.

"No question the biggest problem is nitrogen in our waters. We have to get more resources from the federal government-this is very important," said Jim Gilmore, head of the New York State Marine Bureau.  "We have had several occurrences of fish kills but never of this magnitude. And nitrogen exacerbates the problem.  We want the fish in the water, not dying on the beaches. Algal blooms fueled by nitrogen are making it worse."

"Regardless what the precise cause may have been, these recent die-offs underscore the urgency of the situation and the importance of the County Executive’s leadership in stepping up to confront a challenge that would scare most elected officials away,"  said Peter Scully, Suffolk County Water Quality Czar and former Regional Director of the DEC.  "We can't afford not to address the problem, and we all need to be focused in the same direction. This crisis is not one for those who focus on short-term gains, or for the weak of heart. This is a long-term work in progress that will require a long-term commitment,  significant investments in infrastructure, and sacrifices in the form of changes in individual behavior. But as the County executive has said many times, we can’t afford not to confront this challenge, because Long Island’s future depends on it.”

"I applaud the County Executive's efforts to improve water quality, much work has been done, but much more work is left to do," said Suffolk County Legislator Al Krupski.  "We need to leave the estuary cleaner and healthier than when we found it."

"If you own grass on the riverfront you should not be fertilizing it. Period," said Town of Riverhead Supervisor Sean Walter.  "If you have waterfront property, do not fertilize it. Your moral obligation is to stop using fertilizers.  We are doing so much to impair the estuary, and we are not giving fish a fighting chance to survive."

County Executive Bellone and officials also discussed several initiatives and programs the county is participating in to stop the harmful effects that nitrogen pollution has caused towards the region's waterways for decades. The initiatives include the following:

*         With the help of Governor Andrew Cuomo and Senator Charles Schumer, Suffolk County has secured nearly $400 million in funding for the largest expansion of sewers in Suffolk County since the 1970s.  The funds will be used for 4 sewer projects which were chosen based on the highest potential to reduce the amount of nitrogen.  The levels would be reduced by 25% in designated areas.

*         Suffolk County signed an intermunicipal agreement with the Town of Riverhead to begin a pilot program to test irrigation of our facilities with sanitized wastewater effluent.  The County also awarded the town $8 million to upgrade its Advanced Wastewater Treatment Facility, including the construction of a new sewage treatment plant to meet increased standards of nitrogen removal.

*         Suffolk County has identified pilot programs for implementation in the region in addition to the on-site septic demonstration program launched in 2014, including Shallow Narrow Drain Fields, which are used to disperse wastewater to the soil environment as a natural fertilizer, and Vegetated Gravel Recirculating Filtered Wastewater Treatment Systems, an innovative, alternative, non-proprietary wastewater treatment system that reduces nitrogen from wastewater effluent by planting nitrogen-absorbing vegetation above cesspools.

*         Suffolk County protects its waters by actively acquiring open space around vulnerable bodies of water. The Suffolk County Legislature recently passed a resolution that allows the County to extend an offer to acquire Broad Cove, a 99-acre parcel of land located at the mouth of the Peconic Bay in Riverhead. This cove is considered by the Nature Conservancy to be one of the top 10 Long Island properties in need of protection.

*         Suffolk County will host an Algal Bloom Symposium next month where leading national experts will convene to discuss and identify ways to monitor and manage harmful algal blooms.

*         Suffolk County recently released a comprehensive water resources management plan. The 1,000+ page action plan lays out a number of additional programs and initiatives the County will be undertaking in order to stem the tide of nitrogen.

County officials also noted that there is no threat to the region's drinking water supply, and encouraged residents who get their water supply from private wells to have their wells tested every 6-12 months.

For more information on the County's update pertaining to the recent fish kills or the latest initiatives to reduce nitrogen in the region's waterways, click here.