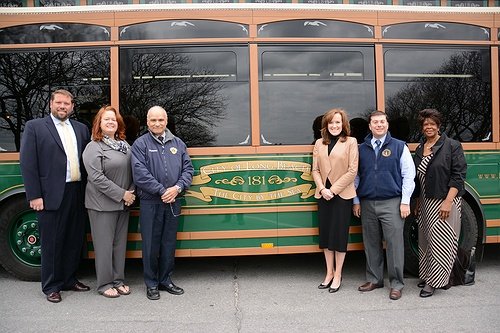 Long Beach, NY - April 27, 2015 - U.S. Representative Kathleen Rice joined Long Beach officials today to unveil the City’s new federally-funded trolley, one of eight vehicles replaced after the City’s public transit fleet suffered severe damage during superstorm Sandy. Rice and Senators Schumer and Gillibrand announced in February that more than $2.7 million in Federal Transit Administration (FTA) Sandy Emergency Relief funds would be provided to reimburse the City for the purchase of five buses, two trolleys and one open-air trolley. The FTA funds cover 90 percent of the slightly more than $3 million cost of replacing these eight vehicles, and the remaining 10 percent is covered through the U.S. Department of Housing and Urban Development (HUD) Community Development Block Grant Program. The state-of-the-art trolley unveiled today is fully accessible, with a wheelchair ramp and two designated seating areas for disabled passengers.

“Today marks an important step in the ongoing effort to make Long Beach whole again,” said U.S. Representative Rice. “Public transit is at the heart of Long Beach’s economy – it takes residents to work every day, it brings customers into the City’s small businesses, and it gives visitors access to all that Long Beach has to offer. Getting these vehicles back on the streets will help this community continue to recover from superstorm Sandy and help residents get back to their normal lives.”

“Replacing the Sandy-damaged trolleys is essential because Long Beach residents, as well as visitors and beachgoers, rely on public transit when exploring all the amazing things this community has to offer.  This new federally-financed trolley—which we worked hard to secure– will help Long Beach residents, businesses and more return to normalcy and help restore much-needed transportation options in Long Beach,” said U.S. Senator Charles E. Schumer.

"As New York continues to recover and rebuild from the damages caused by Superstorm Sandy I am pleased Long Beach will get this federal funding for a new trolley," said Senator Kirsten Gillibrand. "I will continue to fight for the resources necessary to rebuild from the storm so local taxpayers are not stuck footing the bill alone and so that local residents have the reliable, affordable transportation options they need to get to work every day."

"This new trolley is part of the City's continued commitment to making transportation easy, fun, and convenient," said Long Beach City Council President Len Torres. "It offers our residents and their visitors a way to get around to enjoy our restaurants, shops, and activities without needing a car."

"We appreciate our partners at the federal level, Congresswoman Rice and Senators Schumer and Gillibrand, who have assisted us obtaining this new federally funded trolley," said City Manager Jack Schnirman. "We look forward to having our new trolley out on City streets in the very near future."