DEC's completed restoration of the Edward's Avenue Dam, as well as the installation of separate fish and eel ladders at that location unveiled. 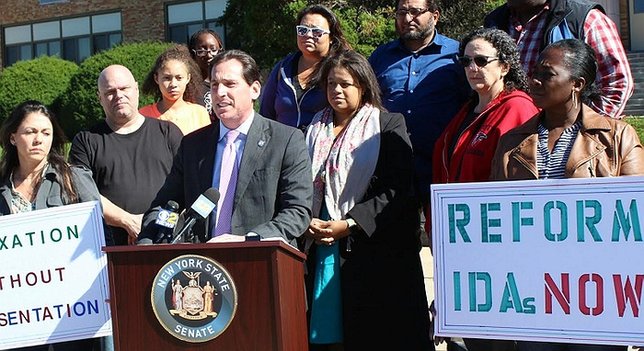 The restoration of the Edwards Avenue Dam, which is owned by DEC, cost approximately $967,500 to construct with funding received from NY Works. The construction project replaces a failing concrete dam with a new concrete structure and steel sheeting spillway. The new spillway structure, which meets 100-year flood protection requirements, has raised water levels behind the dam to levels not seen for nearly a decade when the former Edwards Avenue Dam and its wooden plank board flood control structure began failing.

"The installation of both the fish ladder and the first-ever eel ladder on the Peconic River is a great step forward in enhancing the ecological vitality of the Peconic River watershed," said DEC Commissioner Basil Seggos. "This project, and the work done further downstream to create the first fish passageway and expanded alewife spawning habitat areas, is an excellent example of how public-private partnerships can effectively restore and enhance ecological resources and a waterway that is important to all Long Islanders."

The installation of the fish and eel ladders is part of a long term restoration plan to open 300 acres of critical spawning habitat for river herring and American eels along the Peconic River. The Edwards Avenue Dam will add 35 acres to this goal. The fish ladder is the second ladder on the Peconic River with the most eastern fish ladder located in the Town of Riverhead's Grangebel Park. Other barriers to migratory fish on the Peconic River are in various stages of progress and will be completed in the coming years. Long-term goals focus on expanding river herring, specifically alewife, spawning and maturation habitat areas. Alewives are an important forage fish and a favorite of striped bass. Runs of alewife have been declining along the Atlantic Coast largely due to construction of barriers on historical spawning tributaries.

Town of Riverhead Supervisor Sean M. Walter said, "American eel populations have experienced drastic declines in recent years, and habitat expansion rebuilds the species, as well as the animals in the food chain. This fish passage enables River Herring (Alewife) and American Eels in their quest to swim upstream and spawn, thus effectively opening habitat along the Peconic River. Many partner entities must be recognized for the hard work and funding that was required to complete this project." Specifically, Walter expressed appreciation to the New York State Department of Environmental Conservation and U.S. Fish & Wildlife Services.

Town of Brookhaven Supervisor Ed Romaine said, "The Town of Brookhaven appreciates the work of the Peconic Estuary Program, the NYSDEC and the individuals and environmental groups that have been critical to seeing this project to completion. The fish passage that has been constructed builds on the earlier fish passage built downstream at Grangebel Park in Riverhead.

The Town of Brookhaven and Suffolk County are cooperating to use state grant funds to construct fish passage at the next obstruction, Forge Road. Completing these projects reconnects our river systems with our bays, and allows fish such as River Herring to access ancestral spawning habitat that they have been cut off from for the hundreds of years that these dams have existed. With these projects we are restoring key elements in the Peconic ecosystem. We are also enhancing public access, tourism and fisheries. These actions help maintain and improve the environment that is key to our quality of life."

The Peconic River, the longest river on Long Island, is one of only four rivers classified Wild, Scenic and Recreational Rivers on Long Island and is part of the Peconic Estuary system, one of 28 nationally recognized estuaries in the United States, designated by the U.S. Environmental Protection Agency.

In 2007, the New York State Department of Transportation and DEC created a new canoe and kayak launch site on the Peconic River at Edwards Avenue. This site, which is adjacent to the Edwards Avenue Dam on property owned by DEC, features a launch site, a protected parking area, and pedestrian path. The newly reconstructed dam and fish and eel ladders are about 150 yards east of the canoe and kayak launch site and can be reached either by paddling to the site or by a short walk from the parking lot.

DEC acquired the Edwards Avenue Dam property in 1996 to allow canoeists and kayakers to fully navigate the Peconic River, which the previous site owner was preventing. Suffolk County conveyed the adjacent Peconic River at Edwards Avenue site to DEC in 2005 after taking possession of the property for non-payment of taxes.

"The completion of the Edwards Avenue fish pass and American eel pass is another step in the continuing effort to reconnect the Peconic River for diadromous fish, including river herring and American eel," Peconic River Fish Restoration Commission, Byron Young said. "While this long awaited project is ahead of fish passage efforts on two downstream dams (Forge Lake and Upper Mills) it is a step in the right direction and will be waiting for the fish when they can gain access through the downstream dams. Efforts are underway on those two projects and it is hoped that the completion of this project will hasten the work downstream."

The fish and eel ladders was designed in consultation with the U.S. Fish and Wildlife Service. Installation was performed under a DEC contract in accordance with DEC regulations.