LaValle: "This brings Lyme and Tick-borne disease to the forefront to make sure the CDC commits the necessary funding and resources." 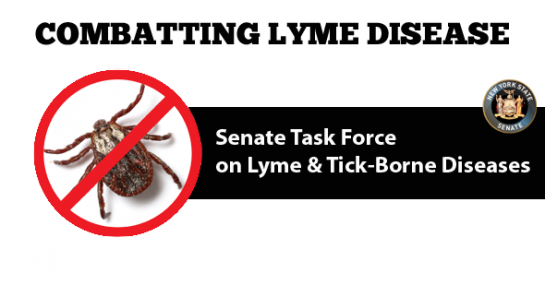 Senator LaValle said, “This brings Lyme and Tick-borne disease to the forefront to make sure the CDC (Center for Disease Control) commits the necessary funding and resources that this disease warrants.  For the first time, there is an action plan to consolidate our many resources and focus on disease diagnosis and prevention strategies.  I am pleased that we have secured funds and are advocating for initiatives such as the four-poster program that has had such good results in places like Shelter Island, where there are high incidences of Lyme disease.”

The Senate Majority Coalition Task Force on Lyme and Tick-Borne Diseases was convened in October to address rising concerns in New York State regarding the outbreak and spread of Lyme and Tick-Borne diseases.  The Task Force was charged with examining state and federal efforts to combat the continued spread of these diseases and make recommendations for submission to the New York State Department of Health for a State Action Plan to facilitate improved prevention, diagnosis, and treatment protocols in order to better protect New York residents.The geographic spread of Lyme and Tick-Borne diseases demand a comprehensive response by the State to encourage detection and prevention initiatives, and facilitate diagnostic and treatment advancements.  While the impact of Lyme disease is widespread, a large number of the cases remain unreported.  This lack of reporting is a cause of concern given that Lyme disease remains the most prevalent Tick-Borne disease in New York State.  As such, the Task Force recommendations include various initiatives to help assist the Department of Health increase reporting and data collection in the State.While Lyme disease remains an area of great concern given the substantial growth in cases, other Tick-Borne diseases continue to emerge and threaten the health and well-being of the public at large.  The Department of Health currently investigates several Tick-Borne diseases, including babesiosis, ehrlichiosis and Rocky Mountain spotted fever.  Recently, babesiosis and anaplasmosis cases have increased in prevalence. Because New York is home to premier research institutions that are primed to help address these rising public health concerns, the Task Force has incorporated opportunities for the Department of Health to research these emerging Tick-Borne diseases at institutions throughout the State.The Senate Majority Coalition Task Force on Lyme and Tick-Borne Diseases has identified the aforementioned issues as a significant public health concern.  Drawing on the immense research and prevention resources that New York State has, the Task Force recommends the formation of a Department of Health State Action Plan to reduce the incidence of infections and increase detection, diagnosis and treatment where cases do occur.  New York should be a leader at the forefront of controlling and addressing this epidemic.