Football fans rejoice – subway commuters can now have a reminder of this year’s big game in right in their pockets. 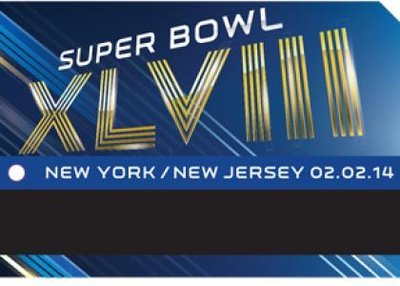 The Metropolitan Transportation Authority will be playing an integral role in this year’s Super Bowl XLVIII, and to celebrate, they have released a series of limited edition Super Bowl MetroCards.

One million Super Bowl MetroCards will be printed – 250,000 of each version, but simply buying a MetroCard does not guarantee that the customer will receive a Super Bowl version.  The limited edition cards will instead be mixed among standard MetroCards at MetroCard vending machines, since millions of MetroCards are printed and purchased monthly

“There’s no better region to host the Super Bowl and no better way to celebrate and promote that fact than by saying it on a MetroCard,” said Paul J. Fleuranges, MTA's Senior Director of Corporate and Internal Communications, in a press release. “The front of our MetroCards has really become a game-changer as a new, innovative medium to advertise.”

The MTA has taken advantage of the cards for advertising purposes since 1995.  The Super Bowl MetroCard campaign is the tenth ad campaign in the history of the MetroCard.

The cost of putting an ad on the back of MetroCards is 18¢ to 51¢ per card, depending on how many cards are purchased, which can run advertisers between $25,500 and $450,000. Advertisers like the Super Bowl Host Committee can use both the front and back of cards with minimum print runs of 250,000 cards at a rate of 25¢ to 45¢ per card.

Football fans have until February 3 to get their hands on the limited edition cards, as that is the last date that they will be stocked in MetroCard machines.