Port Washington Pedestrian Bridge Extension to be Installed This Summer 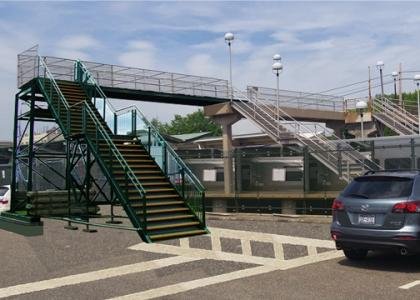 Port Washington, NY - June 17, 2014 - A temporary extension to an existing pedestrian bridge will be installed this summer on the Haven Avenue side of the Port Washington station to restore platform access for customers under a solution proposed by the LIRR and agreed to by Town of North Hempstead Supervisor Judi Bosworth.
The need to restore Haven Avenue access became necessary following the emergency closing in April of the existing pedestrian bridge. The pedestrian bridge was closed after elements of the concrete structure were deemed unsuitable for regular use and could not be repaired.
“We understand the significant inconvenience that the loss of the Haven Avenue overpass is causing our customers,” said LIRR President Patrick Nowakowski.  “I am pleased that we’ve been able to find a temporary solution that we will be able to put in place within a matter of months to better serve customers and the Port Washington community. I would like to thank Supervisor Bosworth, Senator Martins, Assemblywoman Schimel and Councilwoman De Giorgio for their input and cooperation in reaching this agreement.”
“I am pleased that LIRR officials listened to the community’s concerns and responded with this temporary solution,” said Supervisor Bosworth. “It’s important that we address the safety and quality of life of our Port Washington commuters and this proposal addresses both.”
Town Councilwoman Dina De Georgio said: “I am grateful to the LIRR’s President Patrick Nowakowksi and his staff for their quick and practical response.  I want to thank Supervisor Judi Bosworth, State Senator Jack Martins and Assemblywoman Michelle Schimel as well.  It was a true team effort for the benefit of our town.”
The temporary structure will be built with modular, pre-fabricated materials and is expected to be fully installed and open in September.
For the long-term remedy, the LIRR is continuing to talk to Town of North Hempstead and community leaders about a plan that would extend two tracks at the Port Washington station and replace the pedestrian bridges as part of a larger project that would improve LIRR service for Port Washington while updating the station and getting it ready for the opening of East Side Access.
Once East Side Access is complete, the LIRR plans to give Port Washington commuters a choice of services, with direct trains to Grand Central Terminal joining continuing direct service to Penn Station. But, in order to do so efficiently, the LIRR needs to be able to store additional trains at Port Washington station so they are in the proper location for the beginning of the morning rush hour. The LIRR is currently working with town officials on the long term plan.