Families will be admitted only with pre-reservation e-tickets purchased on a first come – first served basis. 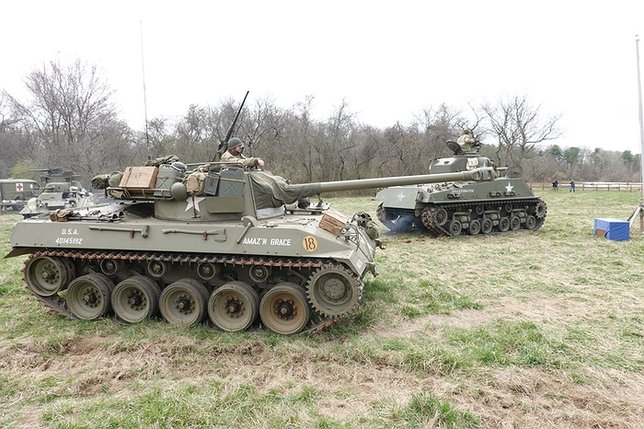 Photo by: The Museum of American Armor

This weekend World War II living historians will be using operational armor and tactical displays to help retell the story of the Allied breakout from Normandy in June 1944, at the Museum of American Armor inside Old Bethpage Village Restoration, 1303 Round Swamp Road, Old Bethpage, Long Island, on Saturday, June 19th and Sunday, June 20th.
While the state’s vaccination rate has hit 70% advance tickets are still required for admission and parks officials say they are very much in demand with a promise of good weather.
Families will be admitted only with pre-reservation e-tickets purchased on a first come – first served basis. Admission fees will be posted and available by going on line at https://www.oldbethpagevillagerestoration.org/tickets.
Among the participants will be interpreters presenting FDR, Churchill and Stalin – the Big Three - who would later meet at Yalta and decide the face of Europe for the next 80 years.
History Channel’s Chief Historian emeritus, Dr. Libby O’Connell notes, “Few understand that these three men not only led the victory over Nazi Germany but created a world – for good or for ill – we continue to live in. Their presentation is one the very rare opportunities to gain insight into that era.”
Families can bring lawn chairs to designated areas, masked, and separated from other visitors as directed by park safety personnel.
The Armor Museum enjoys the support of Squad Security, Bristal Assisted Living, PSEG Long Island, Bethpage Federal Credit Union, among others.