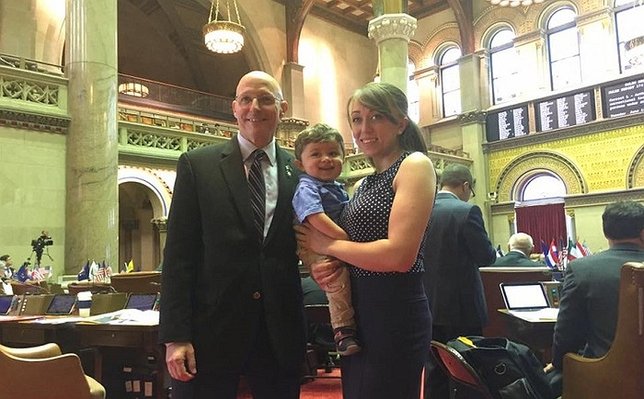 Arthrogryposis Multiplex Congenita (AMC), is a rare condition that occurs before birth and causes the baby to be born with multiple joint contractures. It is estimated that AMC affects roughly 1 child in every 3,000 births. While there is no known cure for AMC, there are treatments, such as surgeries, various therapies, etc. that can improve a person’s independence level and quality of life.

Assemblyman Murray says, “The purpose of passing the resolution was to increase awareness about this condition throughout the state. It is our hope that increased awareness will bring about early intervention, which is key to increasing the success rate of treatment.”

Several families from across the state joined Assemblyman Murray in the Chamber to witness the passage of the resolution. Among those who made the trip to Albany was Bellport resident, Rebeccah Gomez and her 21-month old son, Matthew, who has AMC.  Murray says, “Ms Gomez has been an extremely dedicated and active proponent of increasing awareness about AMC and I was so happy that she, and Matthew could join us to see the resolution get passed.”

The passage of this resolution makes New York the 25th state to officially recognize June 30th as Arthrogryposis Awareness Day throughout the country. Ms Gomez says, “On June 30th, I will be proud to join families across the State of New York and the Nation in wearing the color blue to promote awareness and to honor those affected by Arthrogryposis.”