A 4-foot long alligator was spotted in the Peconic River on Sunday and Wednesday. Wildlife specialists have left bait to keep the gator in the area so that it can be caught. 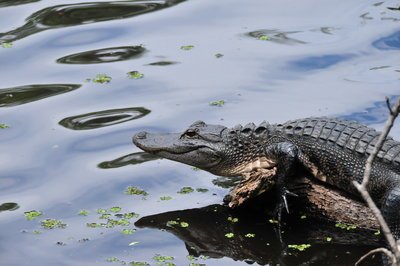 Boaters on the Peconic River are being urged by the Department of Environmental Conservation to keep their eyes peeled for a stray alligator this weekend.

After receiving a call from a Long Island resident on Sunday regarding an alligator sighting in the Peconic River, the DEC spotted the gator on Wednesday, and has set up bait near the Connecticut Avenue Boat launch in Calverton.

“We want him to know that this is his food source so hopefully he'll come up and get more comfortable and we'll be able to capture him alive,” says Department of Environmental Conservation police officer Dan Damrath to News 12 Long Island.

The alligator spotted was about 4 feet long, and wildlife specialists are hoping to use the bait to keep it from swimming downstream so that it can be caught.

Due to the rain in recent weeks, the water level in the Peconic has risen, making it even more of a challenge to catch the gator. The recent weather has also caused the temperature of the water to drop, which may have caused the alligator to go into a dormant state, where they typically rest on the edge of the water near the woods.

The alligator was sighted in the same area where four young alligators were caught in April. Those four were believed to have been abandoned by their owner.

Alligator findings on Long Island have been so frequent that a Reptile and Amphibian Amnesty Day was created.  This year, three alligators were turned in to the SPCA, among other dangerous and illegal reptiles.

Boaters and swimmers in the area should exercise caution.  Anyone who spots an alligator is urged to call 631-444-0250.