Coast Guard crews are searching for a missing paddle boarder in the vicinity of Atlantic Beach, New York, Sunday. 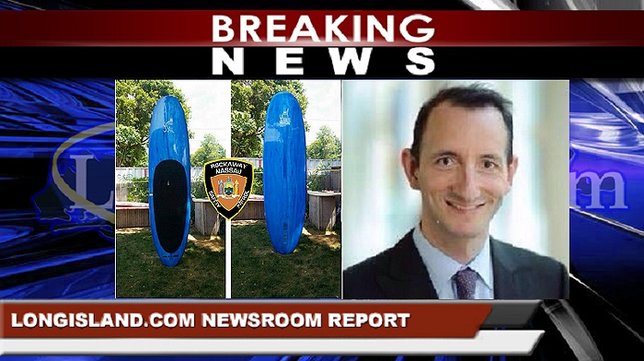 After an extensive search since Gary Turkel went missing paddle boarding, on June 17, 2016, the Rockaway Nassau Safety Patrol confirmed they have located his body. Pictured on the left is Gary Turkel.

"With mixed emotions we report that Mr. Gary Turkel has been found after days of extensive searching since he was reported missing. It is with profound sadness that we confirm Mr. Turkel has passed away. We are pleased that his grieving family is at least able to find some sense of closure now that his body has been recovered. We implore the public to treat this with an appropriate level of respect. We wish our deepest condolences to his grieving family."

Below are earlier updates and the original press release from the U.S. Coast Guard.

Update - June 15, 2016 - Below is an updated message from the Rockaway Nassau Safety Patrol on it's Facebook page:

UPDATE ON SEARCH FOR GARY TURKEL - The RNSP has been leading and coordinating the search for Gary Turkel since the afternoon of Monday, June 13, 2016. This search is in cooperation with local law enforcement, the US Coast Guard, local fire departments, and several private search and rescue organizations. We continue to utilize all of the shared resources offered by all involved parties. Choppers, planes, drones, rescue boats, jet skis, ATVs, sports utility vehicles and all other forms of human resources in the hopes of recovering the missing person. The extent to which government and private organizations have extended themselves is beyond comprehension. We hope that these efforts will lead to a positive outcome. Anyone with information on Mr. Gary Turkel or his paddleboard are asked to call 911 and the RNSP's 24/7 hotline immediately. 917-727-7306

Blue paddle board (Nature shapes custom 11 ft board)
SERIAL NUMBER MUST MATCH THE ONE ON THE RECEIPT. 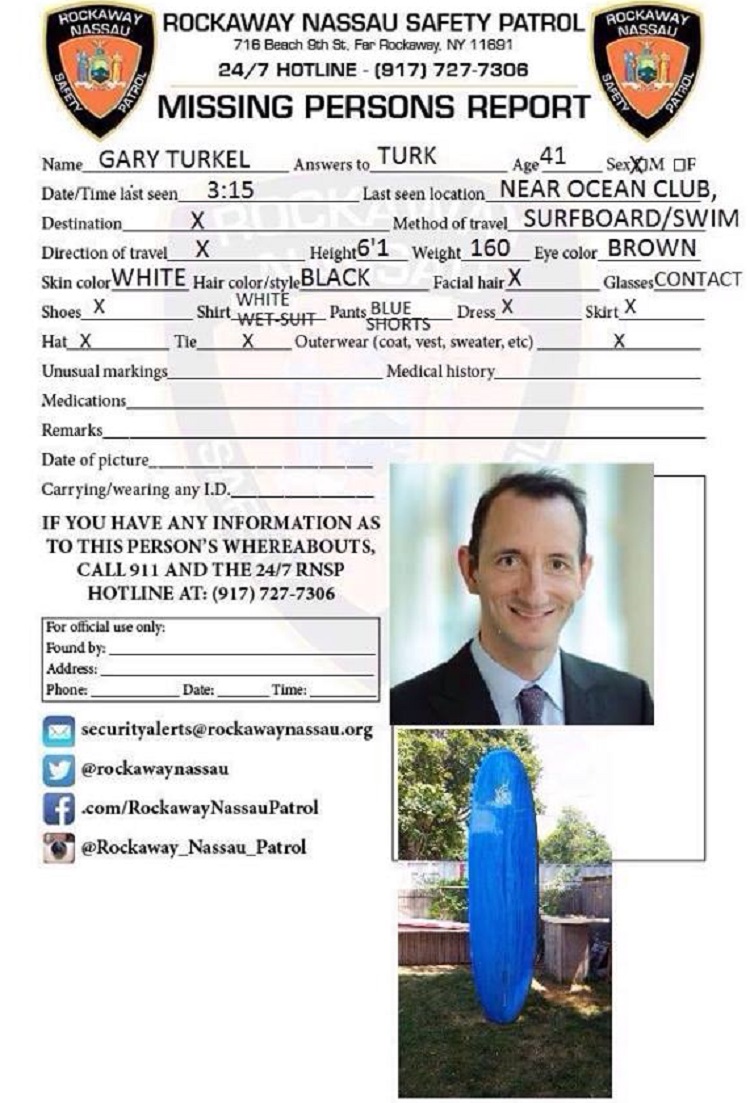 An earlier Coast Guard update and the original press release is below.

Update - June 14, 2016 - The Coast Guard has suspended the search for a paddle boarder who was last seen off Atlantic Beach, New York, on Sunday.

Turkel was reported missing by the Nassau County Fire Department at approximately 6:15 p.m. on Sunday.

A family member called local authorities and stated Turkel had gone out on a paddle board and had not returned. A lifeguard in the vicinity of Atlantic Beach last saw him at approximately 3:30 p.m. Sunday on the paddle board without a life jacket.

The following search and rescue crews assisted with the search:

“We treat every search effort as if we were searching for one of our own family members,” said Captain Edward Cubanski, III, commander Coast Guard Sector Long Island Sound. “I would like to send my deepest sympathy and heartfelt thoughts out to the family and friends of Mr. Turkel during this tragic time.”

The Coast Guard wants to remind all those who venture on the water to always wear a life jacket. The number one cause of water fatalities is drowning. A proper life jacket increases the chances of survival for anyone who may unexpectedly enter the water.

The Coast Guard encourages boaters who enjoy paddlesports to continue doing so, but to use the correct safety and survival equipment. Paddlesport enthusiasts should also brush up on paddling education by taking one or more of the paddler education classes offered by the Coast Guard Auxiliary, state departments of natural resources, community park districts, paddling clubs and local commercial outfitters.

Paddlers should always check the weather forecast before a trip and should dress for the water temperature, rather than the air temperature. At times this might mean wearing wet or dry suits while paddling.

A float plan should be completed and left with someone who is not going out on the water. A float plan is a lifesaving device on paper and provides emergency responders with valuable information they would need in order to search for a distressed or overdue boater. Information on a float plan and how to obtain a blank float plan can be found here.

At approximately 6:15 p.m. watchstanders at Coast Guard Sector Long Island Sound were notified by the Nassau County Fire Department with a report of a missing person in the water.

A family member called local authorities and stated Turkel had gone out on a paddle board near the coast of Atlantic Beach and had not returned. A lifeguard on Atlantic Beach reported, he had last seen Turkel at approximately 3:30 p.m. on the paddle board without a life jacket.

Assisting in the search are:

If anyone has any information regarding Turkel, please call Sector Long Island Sound at 203-468-4401.